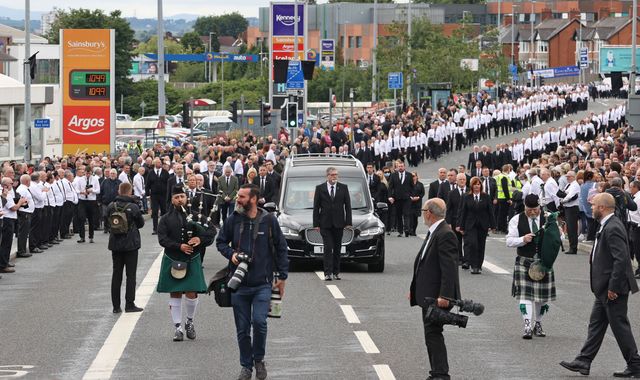 Unionists in Northern Ireland have accused Sinn Fein of hypocrisy after a large crowd of mourners gathered for the funeral service of a former leading IRA member.

The funeral procession started at Mr Storey's home and made its way to St Agnes' church in west Belfast.

The former IRA member's coffin was draped in the Irish flag.

The size of the crowd drew immediate criticism from Sinn Fein's political rivals amid claims of multiple breaches of coronavirus regulations limiting the size of public gatherings in Northern Ireland.

He tweeted: "Having watched families unable to attend funerals or be with their loved one as they passed away I think this undermines the credibility of our executive office."

He added: "In light of the fact that Ms O'Neill is today present with many hundreds of others at the funeral of Bobby Storey her position is untenable.

"Her conduct is grossly offensive and insulting to the many law-abiding people who have made the huge sacrifice of foregoing a normal funeral as they said farewell to family members who died recently."

Following funeral mass, the cortege proceeded to the republican plot at Milltown cemetery where Mr Adams was scheduled to deliver an oration.

Crowds assembled by the roadside applauded as the coffin passed by.

Former Sinn Fein MEP and current Foyle MLA Martina Anderson was part of a guard of honour formed for the former IRA member outside the church.

Mr Storey was a highly influential presence within his community throughout the Troubles in Northern Ireland and subsequent peace process.