Coronavirus: The second wave forecast came true - but we don't know if lockdowns will have desired impact

He warned the country we were facing 50,000 new COVID-19 cases a day by mid-October and this figure would translate into 200 deaths a day a month later.

It seems the government's chief scientific adviser was right.

The UK recorded 367 deaths on Tuesday. This is the highest daily toll since 27 May and close to the 374 deaths recorded on 30 March, a week into the national lockdown.

This figure does not mean Sir Patrick's warning has been well surpassed. The 367 deaths were not lives lost in a single day.

But on the 22 October there were 199 COVID-19 deaths in the UK. That is the actual number of people who died on one day because of the virus. So we have reached Sir Patrick's figure weeks ahead of his prediction.

These figures are likely to keep rising.

I spoke to a hospital employee in North West England, the region most affected by rising COVID-19 cases.

She told me her hospital's COVID-19 wards were full and the only empty beds in its ICU were the ones vacated by patients who had died.

I interviewed two patients in this ICU just two weeks ago. I learned today one had been discharged but, tragically, the other patient had died.

The rising infection rates were dismissed by some people a few weeks ago when the government made local interventions. It was argued these infections were mostly among younger, fitter people who would not fall sick or would present with minor symptoms.

The counter-argument was that the virus could not be contained within this group of people and eventually, the virus would spread to more vulnerable people and that they would die.

The growing death toll would suggest the latter is true.

So is this the start of the second wave that has been predicted? There are scientific parameters for defining a second wave and strictly speaking, this autumn surge does not meet those.

It means one epidemic has to be completely eradicated before a second one can start. It is argued this current outbreak in the UK has only been suppressed. But that hardly matters.

However it is defined, whatever it is called, there is no disputing we are in a renewed surge of deadly infections.

The warnings from hospitals in the North West is that we are going to see more people dying in the weeks to come.

That will almost certainly happen but we cannot be sure of the numbers. Sir Patrick's September forecast came ahead of the government's decision to impose tough local restrictions.

These are designed to break the chain of transmission of the virus but because there is a lag of several weeks between infections and resulting deaths we do not know if the lockdown will have the desired impact.

Everyone will hope they do.

(c) Sky News 2020: Coronavirus: The second wave forecast came true - but we don't know if lockdowns will have desired impact 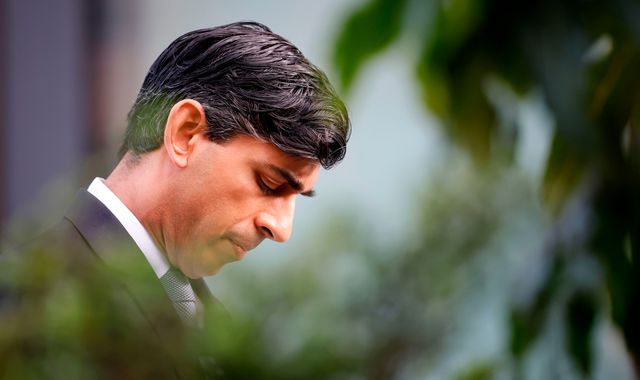