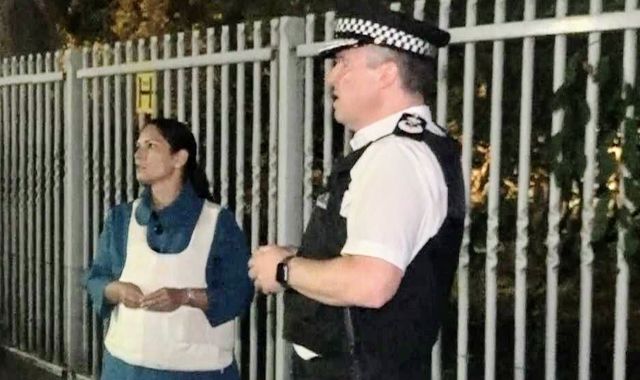 Criminals who organise and run county lines drugs operations have been warned by the home secretary: "We're coming after you."

Priti Patel told Sky News that authorities had "turned a corner" in their efforts against the gangs, as she witnessed an operation against an alleged "county line organiser" in south London this morning.

More than 2,600 people have been arrested since the government made an additional £25m available to tackle the criminal gangs who run drugs from major cities into towns across the country.

The home secretary said the government was determined to ensure that authorities go after the "head of the snake", targeting those responsible for preying on the vulnerable and fuelling much of the violent crime playing out on the country's streets.

Ms Patel said after the raid: "My message is clear, we're coming after you. That has been my message from day one.

"If you're an individual spreading this violence, this dangerous, abhorrent practice of trafficking - we're coming after your associates and your gangs."

Children as young as 12 are used to transport drugs from major cities like London, Birmingham and Manchester to rural parts of the country, along so-called "county lines".

In recent years, gangs have been recruiting youngsters to expand their drug operations, with one dealer previously telling Sky News the rule for county lines mules is "the younger the better", so they are not suspected by police.

Figures suggest criminals are running drugs along 2,000 such routes throughout England, as part of an industry believed to be worth £3m a day.