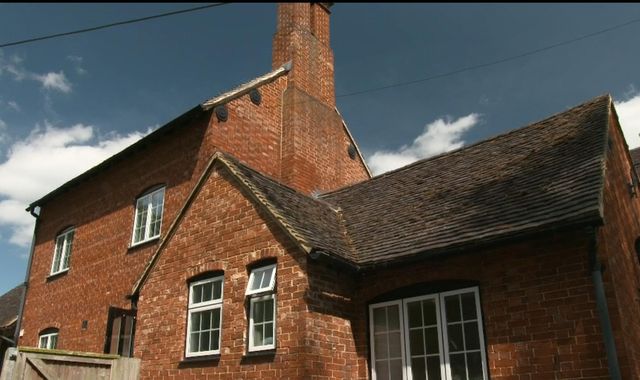 A couple's 17th century home is set to be demolished after they lost a seven-year battle with the government's flagship rail project HS2.

Ron and Anne Ryall signed over the property - once visited by Queen Elizabeth I - in Uxbridge, west London, to the high-speed network on Friday.

"It's like having my stomach ripped out," said Mr Ryall, who had spent a decade refurbishing the house which has been in his family for 60 years.

"Those years were wasted, with the stroke of a planner's pen."

The Ryall family pursued every legal avenue to oppose the compulsory purchase order by HS2, which has been used to buy the red brick farmhouse, along with hundreds of other properties along the proposed route between London and Manchester.

The 400-year-old house is set in the once-peaceful Colne Valley countryside.

But it stands where HS2 plan to build a viaduct for the track, crossing a lake towards Denham Country Park just inside the M25. From here the route will cut through the Chilterns heading north to Birmingham.

"It is very, very difficult to fight such a big organisation," said Mr Ryall as he watched the diggers circle his home from his bedroom window.

"It's like Custer's last stand - he didn't stand a chance either. I'm angry and bitter.

"They've given me what they say is the value of the property, but you can't put a value on this house. Find me another one of these, this close to London with five hospitals within 15 minutes."

Now the couple's possessions have been moved into six storage containers further up the lane outside a much smaller house that they will move into once the plumbing has been fixed.

In the meantime, they will be staying with family or in hotels.

Removal men, hired by HS2, have been moving furniture out of the property and placing it in the containers.

"The worst thing is in the mornings, when you walk round what used to be your home and it is slowly being taken part and it's not just your house, it's your world being taken apart."

Mr Ryall does not think he got a fair value for the property but says he had to accept the offer as time was running out.

"If I hadn't accepted, and they still wanted the house, I would have been fighting the battle outside - with no financial assistance," he said.

A spokesperson for HS2 said: "We fully understand this has been a difficult situation and we have been working with Mr Ryall to find a solution.

"We are therefore very pleased to have been able to reach a conclusion and we hope that he and his family will be happy in their new home."

HS2 has spent more than £600m buying up residential land and property along the track.

The high-speed line has been controversial due to spiralling costs. The estimated budget rose from £56bn in 2015 to £106bn now.

Despite the price hike, Prime Minister Boris Johnson gave the project the green light earlier this year, saying the superfast rail-link will boost the UK economy.

At the fence erected by HS2 around Mr Ryall's property, local residents and environmental campaigners embraced the heritage of the house by dressing up in Elizabethan costumes to protest against the compulsory purchase.

One dressed as Elizabeth I said: "I, Queen Elizabeth I, am here to witness the destruction of a farm in my realm that I visited in 1602 on this very day."

Protester Mark Kier said: "There's a farm that's been evicted this week in Warwickshire, there was a farm near here evicted two years ago.

"We've seen pubs evicted. We've seen families evicted. Nine hundred people are going to be evicted for something that nobody wants."

Mr Ryall says he and his wife Anne will not want to come back and see the house demolished.