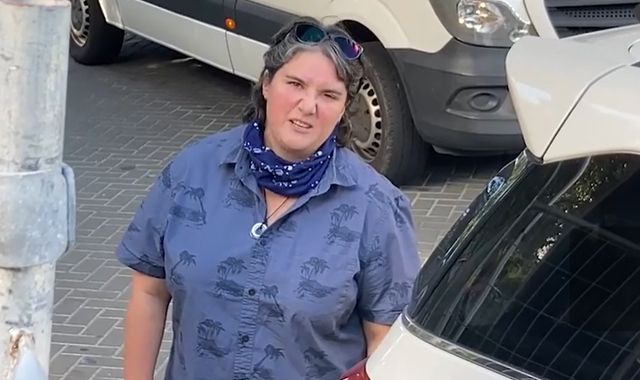 There are calls to deport an Australian woman who refused to take a COVID test while spending 28 days in quarantine at a New Zealand hotel.

Lucinda Baulch travelled to New Zealand as a foster carer last month with three children who were moving into the care of local families.

The children tested negative and were allowed to leave isolation on time - but Ms Baulch refused all tests during her stay, and has now been released from the managed isolation facility.

She told New Zealand news website Stuff on her departure from Wellington's Grand Mercure on Tuesday that she still had not taken a test but she had answered a "series of questions" about her health.

She was taken to Wellington Airport by a van organised by the hotel and said she planned to fly to Auckland and stay there "for a night or two" while considering her next step.

Ms Baulch, a veterinary nurse, had earlier said she refused to take the tests because the information about them was not enough for her to give informed consent.

She told Radio NZ: "As someone with a medical background and knowing the importance of informed consent, for my own peace of mind I really need that informed consent, I'm entitled to it, it's a right, it's an obligation of the party offering a consent form. For me, that's quite an important step."

But COVID-19 response minister Chris Hipkins said the claims were absurd, adding that nurses had spoken with Ms Baulch and additional information was provided in response to her phone calls and emails.

"If a New Zealander went to Australia and refused to get tested in an MIQ facility, what do you think would happen to them?" she said. "They'd be back on a plane to New Zealand.

"So unless this woman is a New Zealand citizen - actually, we shouldn't put up with this behaviour from anybody. And frankly, the Australian government needs to take back their own person if she's one of theirs."

Ms Baulch has reportedly launched judicial review proceedings in protest of her "unlawful detention" at the quarantine facility.

Under New Zealand's strict anti-COVID laws, arrivals in the country must stay 14 days in a government-chosen hotel to make sure they are not carrying the virus.

During their stay they are tested two or three times, depending on where they have come from.

If a person refuses to take the day 12 test, they are offered a test each day of their extended stay to a maximum of 28 days - Ms Baulch refused every one of them.

According to a report by the NZ Herald, she had been told by officials that she would not need a COVID-19 test because she had come from Australia, but once she arrived she was told this was not the case.