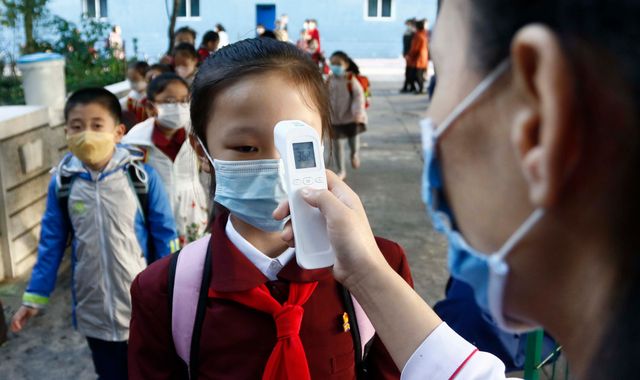 State news agency KCNA said 280,810 people were in quarantine and 27 had died since a fever of unidentified
origins started to be reported in the country in late April.

On Thursday, Pyongyang announced one death from coronavirus - as Mr Kim ordered a strict national lockdown.

KCNA did not say whether any of the new deaths were because of coronavirus.

"The spread of the malignant epidemic is a great turmoil to fall on our country since the founding," Mr Kim told an emergency meeting of the ruling Workers' Party, KCNA said.

The crisis has been caused by the incompetence and irresponsibility of party organisations, Mr Kim reportedly said, while the country must have faith in its ability to overcome the crisis in the shortest possible period.

Aidan Foster-Carter, a North Korea expert from Leeds University, said it was striking that Mr Kim appeared to be describing the situation as the worst disaster since the foundation of the republic.

Mr Foster-Carter told Sky News: "He may have a short memory - he's quite young.

"That (statement) would include the Korean War, in which four million people died, and the famine in the 1990s where we don't know quite how many died but it was in the hundreds of thousands."

He added: "They say the state is in turmoil. North Korea doesn't do turmoil - I don't think it knows how to do turmoil."

The tentative public admission of COVID infections highlights the potential for a major crisis in a country that has refused to accept international help with immunisation.

Mr Foster-Carter said the people of North Korea may be "wholly unvaccinated".

He continued: "North Korea is one of just two countries in the world - the other bring Eritrea, often called the North Korea of Africa - which hasn't vaccinated anybody, officially, as far as we know.

Outlining the scale of the problem, Mr Foster-Carter said: "Half the population is malnourished - comorbidities with things like TB is going to be a problem - I really don't quite know where it goes. I think (Kim) is going to have to ask for help.

"And I think maybe going public is the first step towards doing that."