COVID-19: 'Big falls' in infection rates across London and South East - but new cases remain high in some areas 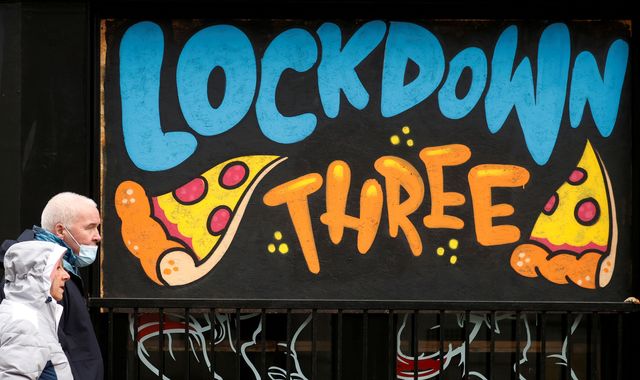 COVID-19 cases in England fell by about 60% from February to March - but the latest data suggests that this decline is now "levelling off".

The latest REACT study suggests infection rates are now at a level last seen in early September - and are nearly the same as the end of the first lockdown last May.

COVID-19 infection rates fell in all age groups and regions across February and March, researchers said.

London and the South East saw the sharpest drops in infection rates from February to March, but experts have warned there remains "persistent areas of higher prevalence" in southern Yorkshire and parts of the Midlands and the North West.

Across England, data shows an average of just one in 500 people was carrying the virus in March - and the study also indicated that the vaccine rollout could be "breaking the link" between infections, deaths and hospital admissions.

Those aged 65 and over, who were prioritised for the vaccine, had the lowest prevalence of infections, deaths and hospital admissions, the study's 10th round from 11 to 30 March found.

The relationships between cases and deaths "has diverged from January onwards and is in keeping with the timing of the rollout of the mass vaccination programme", the study's authors said.

Children aged five to 12 had the highest prevalence in cases in March, which coincided with schools returning on 8 March and twice-weekly testing of pupils taking place.

Professor Paul Elliott, director of the REACT programme from Imperial's School of Public Health, said: "We have seen a gratifying fall in infections since our last survey in February, with infections dropping by around 60% overall.

"This is hugely encouraging and shows we're headed in the right direction.

"However, in our most recent data there has been a flattening off in the infection rate with an R number now around one.

"This shows that we need to continue to approach the situation with caution and keep sticking to the rules."

More than 140,000 volunteers aged five and over from around England were tested with PCR tests in the 10th study, with more than 1.5 million people providing swabs since April 2020.

The study found, as with previous rounds, that people living in the most deprived neighbourhoods had higher infection rates than in wealthier areas.