COVID-19: Theresa May tells Boris Johnson to level with the public as she slams 'incomprehensible' travel restrictions 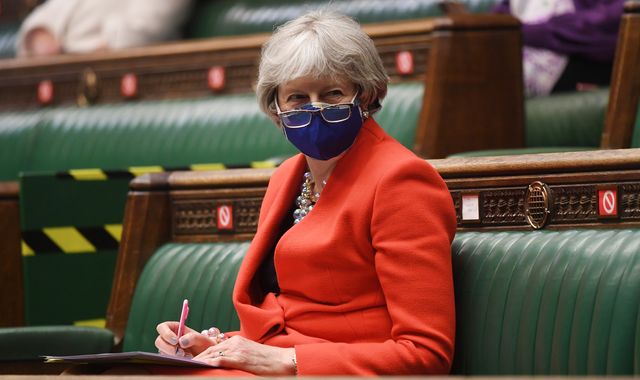 Boris Johnson needs to level with the public about what the future of travel will look like and tell them that "we will not eradicate" coronavirus completely from the UK, Theresa May has said.

In a forthright intervention in the Commons, the former prime minister said it is "incomprehensible" that the UK, which is "one of the most heavily vaccinated countries in the world", is the nation that is the "most reluctant to give its citizens the freedoms those vaccinations should support".

And she hit out at the government's approach to international travel during the COVID-19 pandemic.

"We are falling behind the rest of Europe in our decisions to open up," Mrs May said.

She told MPs that people will "never be able to travel abroad ever again" if ministers maintain their stance that it cannot be restarted until there are no new variants of the virus elsewhere.

Mrs May was speaking in a general debate on the aviation, travel and tourism industries.

Mrs May, who was PM from 2016 to 2019, said the government had failed to deliver on its vow from June last year to ensure that internationally-agreed standard health measures would be in place.

"One year on, we are no further forward - indeed, what we have is a devastated industry, jobs lost and global Britain shut for business. More than not being any further forward, we've gone backwards," she said.

"We now have over 50% of the adult population vaccinated - a wonderful programme - yet we're more restricted on travel than we were last year.

"In 2020, I went to Switzerland in August, South Korea in September, there was no vaccine and travel was possible - this year there is a vaccine, travel is not possible. I really don't understand the stance the government is taking."

A traffic light system for travel is currently in place, with destinations given a green, amber or red designation.

People can travel to green list destinations and not have to quarantine upon their return, but only a handful of countries are categorised as green destinations.

Popular tourist destinations like France, Spain, Italy and Portugal are on the amber list - the latter of which was moved from the green list after Britons enjoyed three weeks of quarantine-free travel.

The government has told people that they should not be going to amber list destinations on holiday, with travel only permitted for specific reasons.

Any Britons who do go to countries on the amber list have to quarantine for 10 days upon their return.

Travel is banned to countries on the red list.

Mrs May criticised the "mixed" messaging around amber list destinations and said the system was "chaotic".

She added: "I think there are some facts the government needs to be upfront with the British people about and ministers need to think a bit more of when making these decisions.

"First, we will not eradicate COVID-19 from the UK. There will not be a time when we can say that there will never be another case of COVID-19 in this country.

"Secondly, variants will keep on coming. There will be new variants every year.

"If the government's position is that we cannot open up travel until there are no new variants elsewhere in the world then we will never be able to travel abroad ever again.

"And the third fact that the government needs to state much more clearly is that sadly people will die from COVID here in the UK in the future, as 10,000 to 20,000 people do every year from flu."

Mrs May said the government "needs to decide whether it wants an airline industry and aviation sector" in the UK, adding: "It is incomprehensible that one of the most heavily vaccinated countries in the world is one that is most reluctant to give its citizens the freedoms those vaccinations should support."

Her entry in the register of MPs financial interests shows that she received use of the airport's Windsor Suite on 12 occasions in 2020, each valued at £4,200.

Mrs May referenced this entry when she spoke in the Commons on Thursday.

Opening the debate, transport minister Robert Courts said the government wants to welcome people back and allow Britons to explore the world again, but added: "We cannot and we will not rush this, and we cannot and will not undermine our hard won progress.

"If we move too quickly, recklessly even, we could throw away our progress and take us all - including the travel, tourism and aviation industries back to square one."

(c) Sky News 2021: COVID-19: Theresa May tells Boris Johnson to level with the public as she slams 'incomprehensible' travel restrictions 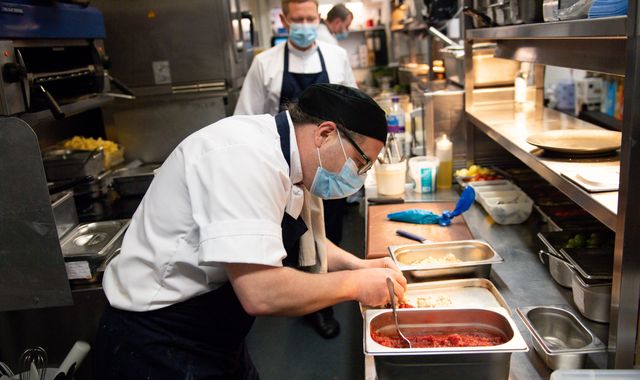