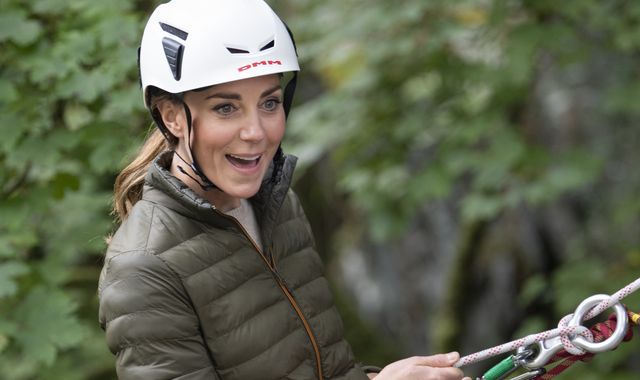 The Duchess of Cambridge has turned her hand to abseiling during a visit to the Lake District.

Kate was in Cumbria to mark the reopening of the Windermere Adventure Training Centre after a £2m refurbishment.

After mountain biking with a group of RAF air cadets, the duchess tried abseiling at the Cathedral Quarry in Little Langdale.

Itelouwa Odipe, 13, from Lancaster, spoke to the duchess as she waited to rappel down the quarry.

"She was about to abseil and I was next in line, so she asked me if I wanted to go before her. I was a bit scared so I said no," he said.

"I think she was very kind. Even though she is a royal highness she still does things normal humans do."

Kate also spoke to former air cadet Emma Wolstenholme, 39, who is planning to row across the Atlantic to raise funds for the organisation in its 80th anniversary year.

Ms Wolstenholme said: "She thinks it's incredible, an amazing challenge.

"It's such a great cause. I joined the cadets at 13 and went from being the quietest kid in the school to one of the more confident, outdoorsy and adventurous ones."

The duchess is Honorary Air Commandant of the RAF cadets and the improved adventure centre will allow hundreds of cadets to visit the Lake District each year.

After spending time with the cadets, Kate was also due to go on a boat trip with two of the "Windermere Children", a group of 300 child Holocaust survivors who came to stay in the Lake District in 1945.