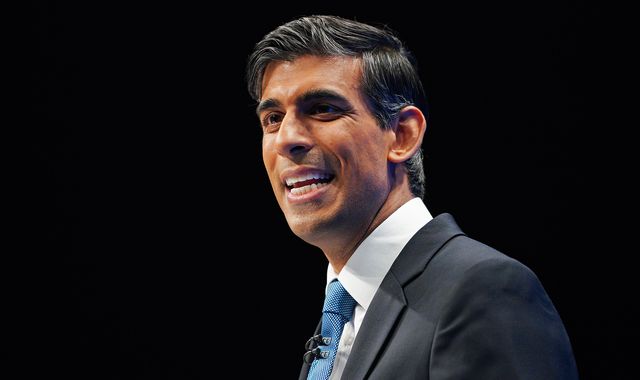 The chancellor has appeared to rule out helping businesses with soaring gas prices, saying "it's not the government's job" to manage the costs of individual products.

Asked if he would accept some companies going out of business, Rishi Sunak said he "believes in a market economy".

He said the government has been working "very constructively" with firms and is "doing everything we can" to address supply chain issues.

"They are global in nature, so we can't fix every single problem, but I feel there'll be a good provision of goods for everybody and we are working out ways to remove blockages where we can," he said, speaking after a meeting with G7 finance ministers in Washington.

The chancellor stood firm on the government's refusal to increase immigration to address labour shortages.

"I think there's a broader point about historic reliance on immigration," he said, "and that's something we've discussed in this country together and collectively decided that's not the right model going forward.

"We want to move to a higher wage, higher skill economy."

He admitted that would take time and wanted to make sure it was accompanied by increases in productivity in order to avoid a rise in inflation.

Addressing the backlog of shipping containers at Felixstowe, the UK's largest commercial port, the chancellor said ports in the US are facing similar problems, naming Los Angeles and Long Beach as examples.

"These are things that many countries are facing and we're looking at all the different elements of the supply chain and where we can make a difference, where it's in our control then of course we're going to do everything we can," he said.

To tackle the issue in the US, President Joe Biden announced a deal today to expand operations at the Port of Los Angeles which would make it a 24-hour, seven-days-a-week operation.

The decision by Maersk, a major global shipping company, to divert a large container ship from the UK to elsewhere in Europe has sparked concerns about shortages of products in time of Christmas, which the chancellor dismissed.

"I'm confident there'll be a good amount of Christmas presents available for everyone to buy," he said.

On the subject of the Northern Ireland Protocol, he said the government will look through the EU's proposed changes and should work "intensively" with the bloc to "see if we can find some common ground to a lasting solution".