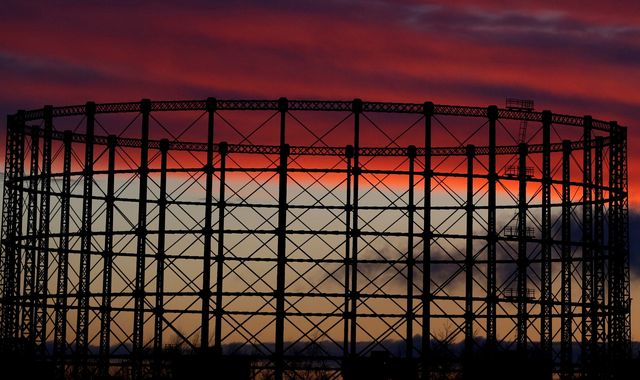 Two more energy suppliers together serving more than 800,000 customers have fallen victim to the crisis engulfing the sector.

Avro Energy and Green said they had ceased trading - with the latter blaming "unprecedented market conditions and regulatory failings".

Green, which has 255,000 customers and 185 staff, confirmed its collapse a day after Sky News revealed that it had lined up advisers to oversee a potential insolvency.

Avro has 580,000 customers. Between them the two companies supply 2.9% of the UK domestic energy market.

It means that altogether more than a million have been affected by suppliers going bust in just over a week as the price of buying energy on wholesale markets surged.

The crisis is also reverberating elsewhere in the economy with the government shelling out tens of millions to subsidise the restart of carbon dioxide production - a vital ingredient in the food and drink production process - at a key factory that had been shut down because of the high prices.

Avro and Green's announcements came as the chief executive of regulator Ofgem told MPs more suppliers could go bust in coming months after a surge in wholesale gas and electricity prices.

Jonathan Brearley told the business select committee: "We do expect a large number of customers to be affected, we've already seen hundreds of thousands of customers affected, that may well go well above that."

Meanwhile, Sky News revealed that Igloo, another small player in the sector, was close to being added to the list of casualties as it called in advisers - and has stopped taking on new customers.

Green said it was "exiting the market due to the government failing to provide any support to smaller energy suppliers".

It pointed to conditions that had seen wholesale electricity and gas prices hitting new record highs, driven by a series of factors from unplanned production outages, Brexit, and severe weather to global demand, the Suez Canal blockage and a recent fire at a cross-Channel interconnector.

That means that Green, like other suppliers, has been selling energy to customers, with the current cap on standard tariffs not reflecting the current situation.

Earlier this week, the company coordinated a letter to the government, with 14 other smaller suppliers, accusing Ofgem of being "unfit" to regulate the industry and calling for support.

In a statement on Wednesday confirming its demise, Green pushed back against claims that "bad business practices" were to blame for its own and other business failures in the sector.

It also pointed to factors outside its control, among them the impact of lockdowns in changing customer usage patterns and orders to provide payment holidays for customers during the economic crisis caused by the pandemic.

Business secretary Kwasi Kwarteng has said that "badly run" energy companies will not be bailed out.

Instead, the government is considering state-backed loans to support larger rivals that take on the customers of suppliers that go under.

Green said: "Green fears that smaller energy suppliers are being left behind by the government, with rescue packages being put in place for larger suppliers and for private discussions to be held with the business secretary.

"There is a position in government and Ofgem that smaller suppliers should be left to fail, despite the unprecedented increases in wholesale electricity and gas, the cost of failed suppliers being mutualised across the industry, and an outdated price cap methodology forcing smaller suppliers to sell at a loss."

Ofgem said it would protect customers of Avro and Green and assured them supply would continue as normal. The regulator will choose a new supplier for them.

The collapse of the two firms follows that of Utility Point and People's Energy - which between them served more than half a million customers - last week.

This month has also seen the demise of PfP Energy and MoneyPlus Energy, affecting nearly 90,000 customers.