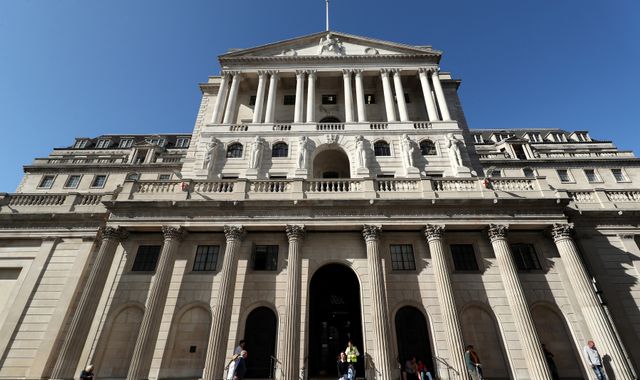 Ethnic minority applicants for Bank of England jobs are less likely to be hired or promoted and are more likely to receive lower bonuses and leave the Bank, a review has found.

The review also found that employees from ethnic minorities reported feeling less included and that they were less likely to believe they were treated fairly.

It concluded that while the BoE's leadership had indicated a "desire to make progress in racial/ethnic inclusion", its strategy "lacked focus and clarity".

The review was launched last year after the murder of George Floyd in the US prompted widespread public discussion about race and ethnicity and the Bank acknowledged it was "not moving far or fast enough on diversity or inclusion".

It has resulted in a new set of targets to increase ethnic diversity.

Bank of England governor Andrew Bailey said: "The experience of colleagues with different ethnic backgrounds has not reflected the kind of institution we want to be.

"I am confident we can make this institution an organisation where everyone can thrive and feel proud."

The review found that while the Bank had taken on an ethnically diverse range of people for early career schemes such as its graduate programmes, there was a "leaky pipeline" for recruitment for roles advertised externally to experienced candidates.

That meant that while 44% of applicants for these jobs in 2019-20 were from ethnic minorities, only 38% were interviewed and 29% hired.

The finding was partly blamed on the fact that such roles tended to be filled by internal candidates - a group which already tended to be less ethnically diverse.

Yet even allowing for experience at the Bank, and candidates' performance scores, internal white candidates were still more likely to be successful in their applications.

The review found white BoE workers tended to receive higher performance ratings and opportunities for career progression and promotion rates were generally higher for them.

Pay levels were equivalent for white and ethnic minority colleagues at the same pay grade but bonuses were on average lower for ethnic minorities.

The review also found "greater exposure to discriminatory or inappropriate behaviours" and that its mechanisms for reporting such behaviour "were not always trusted to operate in a safe way that would lead to appropriate action".

It also pointed to the impact of "micro-aggressions" - for example, black BoE employees were much more likely to report being often interrupted at meetings while other instances included "making assumptions about someone's capabilities or background on the basis of their race or ethnicity".

Meanwhile there was a "lack of follow-through from commitments to implementation and monitoring" of aims to improve inclusion from the Bank's leadership.

There was "too great a load carried by minority ethnic colleagues themselves as volunteers in their spare time".

The review added: "Minority ethnic colleagues were more likely to leave the Bank. That is not surprising given the disparities in their career experiences."

That trend has seen the Bank struggle to progress towards targets for ethnic minority representation at senior levels.

A goal for this to reach 13% by the end of 2020 has been pushed back by two years and is currently at about half this level, little changed over the last five years.

Earlier this year, the Bank of England's annual report found there was a 10.8% pay gap for ethnic minority staff, down from 11.3% a year earlier - blamed on a lack of representation in senior roles.

Last year, the Bank apologised for the "inexcusable" connections of some former governors and directors with the slave trade and said it would remove any images of them from display.