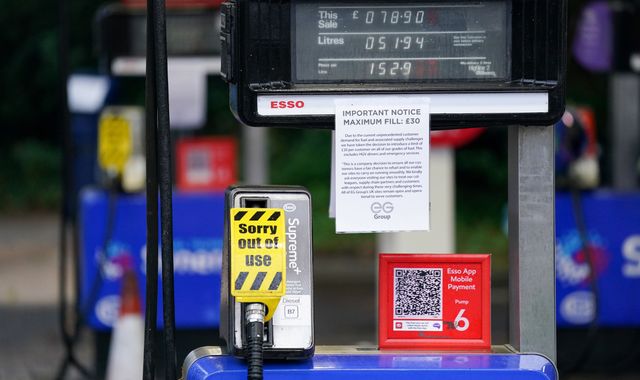 The fuel crisis is a result of the government's "chronic lack of planning and sheer incompetence", Labour's shadow home secretary has told Sky News.

Nick Thomas-Symonds said he and his shadow cabinet colleagues wrote to Transport Secretary Grant Shapps in July asking about what the plan was if there was a lack of HGV drivers, which has been blamed on current fuel shortages across the UK.

But he told Sky News' Kay Burley: "We got very short shrift from Grant Shapps who wrote back to us in the first week of August saying, in his words, he wouldn't be using foreign labour to solve this issue.

"The government says it wants to train up, and I'm in favour of training up HGV drivers, but it hasn't done that to a sufficient extent."

Mr Thomas-Symonds said the crisis is "of the government's own making" as he said the offer of a three-month visa for European lorry drivers is not enough.

"It's this government that has ended up in this situation through its chronic lack of planning and sheer incompetence," he added.

He said the visa offer to 5,000 workers was not enough to solve the shortage but could not give a specific number that Labour would want to bring in, saying he would have to consult with the industry.

Defence Secretary Ben Wallace told Sky News on Monday the army is on standby to help deliver fuel if necessary.

Tobias Ellwood, chair of the defence select committee, said this is what the army trains for and was pleased the government is looking at using them.

But he admitted the government has "an issue in handling crises" and decision-making within government is "very risk-averse".

He told Sky News' Kay Burley: "There is not enough foresight to recognise the bottlenecks and prepare for them."

Mr Ellwood added: "No doubt about it, you're kidding yourself if you don't think Brexit has changed the landscape."

Gavin Barwell, Theresa May's chief of staff when she was PM, agreed as he called out Tory MP and Brexiteer Iain Duncan Smith for saying the opposite.

"COVID exposed just how sluggish our institutions can be, and now we are paying the price."

But Mr Barwell said: "Brexit is not the only factor - there are (less acute) shortages in some European countries - but to pretend it has nothing to do with Brexit is absurd."