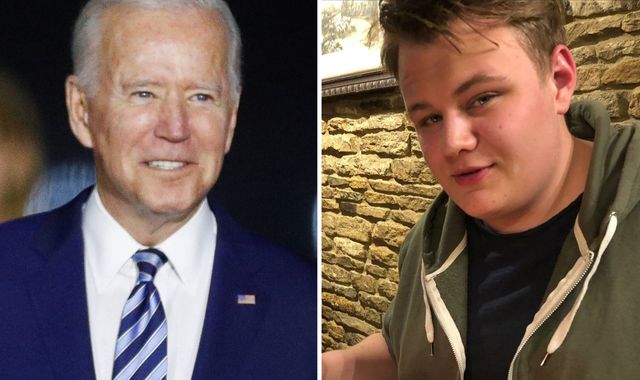 The mother of teenager Harry Dunn, who was killed in a collision with a vehicle driven by a US intelligence agent, says she'd "welcome the opportunity" to meet with President Joe Biden to discuss the case while he's in the UK.

Harry, 19, was riding a motorcycle when he died in the crash in August 2019, in which American Anne Sacoolas, 43, was the other driver.

Mrs Sacoolas is alleged to have pulled out on to the wrong side of the road as she left RAF Croughton in Northamptonshire, a US air force listening station.

She left the UK after claiming diplomatic immunity and the US has refused to return her to face justice in spite of Harry's mother Charlotte Charles securing a meeting with the then-president Donald Trump, who surprised her by telling her Mrs Sacoolas was at the White House and willing to meet them.

Mrs Charles reiterated that they'd only meet her in the UK.

"Sadly we had a nasty trick played on us and that's left us with some pretty deep emotional scars, but I would definitely welcome the opportunity to meet with President Biden."

"I'd take the opportunity to remind him the UK and the US are the strongest allies in the world and the US shouldn't have treated the UK in this way at all," she added.

Mrs Charles hopes that Mr Biden, who lost his first wife Neilia and one-year-old daughter Naomi in a crash in 1972, would be more sympathetic to their fight to bring Mrs Sacoolas before a British court.

"He's got personal experience of a loss of a child, or two, in his case," she said.

"And I would hope I would be able to draw on his personal experiences - to make him understand and see the reason why we, as a family, need closure."

Harry's mother continued: "We have had untold damage done to us with the way we have been treated and I would really urge him to dig deep and look back at some of the speeches he's made.

Harry's family are currently pursuing Mrs Sacoolas in a civil case for damages in the US. During a hearing there, a lawyer for Mrs Sacoolas said she'd "fled" the UK due to issues of security.

In January, attorneys for Mrs Sacoolas said she was "willing to cooperate with the British authorities and to resolve this matter, but she is not returning to the United Kingdom".

(c) Sky News 2021: Harry Dunn's mother calls on Joe Biden to 'put the wrong right' and meet with her while he's in UK