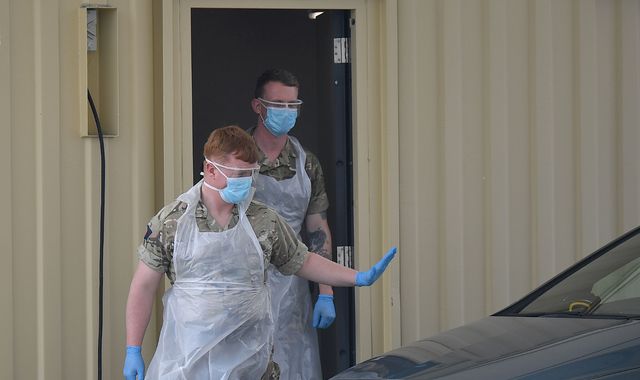 A coronavirus testing centre in Kent has been shut - reportedly to make way for a lorry park in the run up to the next big Brexit deadline.

Part of a car park at Ebbsfleet International train station was used at the start of the pandemic as a drive-through to test NHS staff and other essential workers for COVID-19.

But the government has confirmed the centre has been closed and a new one set up 30 minutes away in Rochester.

This is because the original site "is required by HMRC for EU exit", according to a leaked document from Kent County Council reported by the BBC.

It said the space may be needed to carry out checks on goods when the transition period runs out at the end of 2020.

Kent County Council did not deny the report when contacted by Sky News.

It is understood the Ebbsfleet site is being considered for use to carry out customs checks of cross-Channel lorries from 31 December.

That is the point when the UK will stop automatically following most EU rules and either enter into a new relationship struck by trade deal negotiators or based on World Trade Organisation terms.

The government confirmed the testing centre has closed but insisted "final decisions" on which sites will be chosen have not been made yet.

A spokesperson said testing sites were "set up at great speed and selected for their immediate availability, security and access".

They added the testing site in Ebbsfleet has been "relocated" and will "continue operating as long as needed".

Rachel Reeves, Labour's shadow Cabinet Office minister, said it was a "disgrace" when "the system is under so much strain, and sick people are being sent on wild goose chases to get a test".

She added: "It puts communities at risk and just typifies this Tory government's shambolic and incompetent approach to planning, both on COVID-19 and our transition out of the EU.

"It really isn't too much to ask that ministers coordinate their last-minute lorry parks better, and not close much-needed testing centres that are so vital for tackling this pandemic." Which parts of Wales are in lockdown and what are the most recent rules?