'Let's get going': Government steps up Brexit preparation with details on travel and immigration 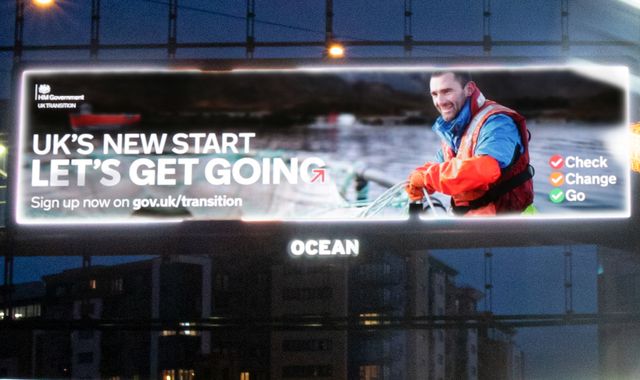 The government is to set out the UK's future immigration and border policies today, as it aims to prepare the country for the end of the Brexit transition period.

Home Secretary Priti Patel will say the country will be able to "welcome the best and brightest global talent" as she publishes a 130-page document detailing how the new points-based immigration system will operate.

The announcement is expected to include a visa for foreign health professionals, but Labour says the proposals have been "rushed" and could cause "major problems" for the NHS and care sector.

The new policies will take effect from 1 January 2021, when the UK leaves the EU customs union and single market.

Cabinet Office minister Michael Gove has launched a public information campaign to tell individuals and businesses how to prepare for the changes.

A new website will use the "Check, Change, Go" strapline and will provide a questionnaire tool to identify specific steps to take.

UK nationals intending to travel to Europe next year will be advised to purchase comprehensive travel insurance and check with their mobile phone provider about additional data roaming charges.

Those wishing to travel with pets will also be advised to seek the required documentation from a vet at least four months before travelling to the EU.

In a statement Mr Gove said: "At the end of this year we are leaving the single market and customs union regardless of the type of agreement we reach with the EU. This will bring changes and significant opportunities for which we all need to prepare.

"While we have already made great progress in getting ready for this moment, there are actions that businesses and citizens must take now to ensure we are ready to hit the ground running as a fully independent United Kingdom.

"This is a new start for everyone in the UK - British and European citizens alike - so let's get going."

The campaign will use television, radio and online advertising, as well as sending information via text message.

Acting leader of the Liberal Democrats Sir Ed Davey said: "Businesses right across the United Kingdom have struggled to survive financially over the past few months as a result of the coronavirus crisis.

"The fact that the government is now trying to force them to gear up and prepare for the end of the transition period will fill them with utter horror."

Business groups have warned many firms will not be ready to implement changes by the end of the year.

Jonathan Geldart, director general of the Institute of Directors, said: "With so much going on, many directors feel that preparing for Brexit proper is like trying to hit a moving target. Jumping immediately into whatever comes next would be a nightmare for many businesses.

"A commitment to some form of reciprocal phasing-in of changes once clear is a long-standing ask from our members, and the benefits would be significant.

"At a time when government is rightly straining every sinew to help firms deal with widespread disruption, it would be counterproductive not to seek to minimise it at the end of the year".