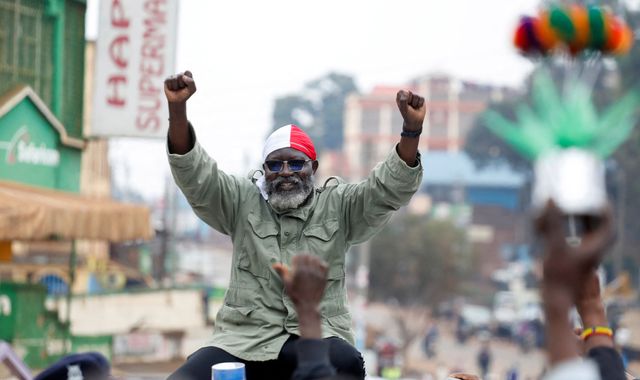 As Kenya's two leading presidential hopefuls vie for votes in the upcoming election, a third candidate has emerged on a campaign of marijuana and hyena testicles to help solve the country's economic problems.

However, reggae aficionado George Wajackoyah has emerged as a wildcard candidate, who has promised to erase the country's debt with his "ganja solution".

Mr Wajackoyah has attracted younger members of the electorate, with many saying conventional politicians have failed to tackle corruption, inflation, and unemployment.

The grave-digger-turned-law-professor has polled at around 2% of votes, but could have a say in the election if he endorses one of the front-runners or take votes from another.

During his campaign trial, he has promised to wipe out Kenya near $70bn (£57.9bn) debt by establishing a medical cannabis industry and exporting animal parts to China, where he says hyena testicles are considered a delicacy.

"I've created a new tribe, known as the ganja tribe," he said, explaining his popularity.

"These (politicians), they have helicopters, they have money, they have painted cars. I don't even have a single poster."

Mr Wajackoyah is a well known figure on Nairobi's club scene, and local media coverage of his run for the presidency has led to speculation that he is backed by a bigger campaign to try to attract the youth vote.

However, he has dismissed these rumours, saying that he has turned down offers of cash for support from candidates.

Instead, he dreams of smoking marijuana in the president's office.

"We shall go to state house and smoke it around to remove the colonial impurities," the 62-year-old said in his
wood-panelled office, sporting a do-rag and listening to a Hare Krishna prayer.

Other policies on his manifesto range from federalising the government and renegotiating Kenya's debt with China to hanging people found guilty of corruption.

"We've come in with the ganja solution," he said.

The wildcard candidate is running on a shoestring budget, with supporters creating homemade posters featuring his snow-white beard and the slogan "Wajackoya the 5th", referencing his bid to become Kenya's fifth president.

"If I showed you the amount of money I have, you would laugh," he said.

Because of his budget, his rallies involving him arriving at markets unannounced, blaring reggae music from his car and pitching his candidacy to onlookers.

On Wednesday, Mr Wajakoyah's convoy went to Gatundu, around 30km north of the capital, where a crowd of around 400 people gathered.

"Every election cycle everybody just comes here with their propaganda," said Jeff Mwangi, a labourer.

"If this man can do what he's actually saying… we will go very far as a country."