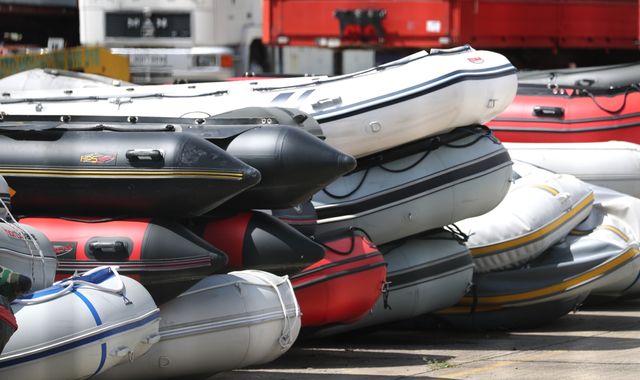 French officials have been urged to take a tougher stance on migrants, after a record week of Channel crossings.

Some 96 people were intercepted in the Channel on Friday - a day after a record 202 migrants made the journey.

The previous daily record for migrant crossings was on 13 July, when 180 successfully landed in the UK.

Immigration compliance minister Chris Philp wants France to be stronger at stopping the boats at sea and directing them back to the shore before they reach the Kent coast.

French authorities have stopped thousands of crossings this year, the government acknowledged, before adding that more could be done.

Mr Philp said: "The number of illegal small boat crossings we are seeing from France is unacceptably high.

"And migrants continue to arrive in Calais to make the crossing.

"The French have to take tougher action.

"We need stronger enforcement measures, including interceptions at sea and direct return of boats.

"The French have heard that directly from the home secretary and we will continue to work with them until the situation changes.

"We will also continue to go after the criminals who facilitate these crossings and return the migrants who come to the UK in this way."

In July, more than 1,000 migrants managed to cross into the UK, according to analysis by the PA news agency.

The Home Office launched an attack on "activist lawyers" on Friday, who it claims are thwarting efforts to send migrants back to France.

It referred to "vexatious" claims that are stopping the government and its attempts to remove the migrants from the UK; however, it would not reveal how many migrants remained in the country.

Minnie Rahman, public affairs and campaigns manager at the Joint Council for the Welfare of Immigrants, said: "Those being forced to make desperate journeys across the Channel are doing so because they simply have no other options and become reliant on those willing to exploit them."