New Zealand mosque shootings: Gunman to represent himself at sentencing after sacking lawyers 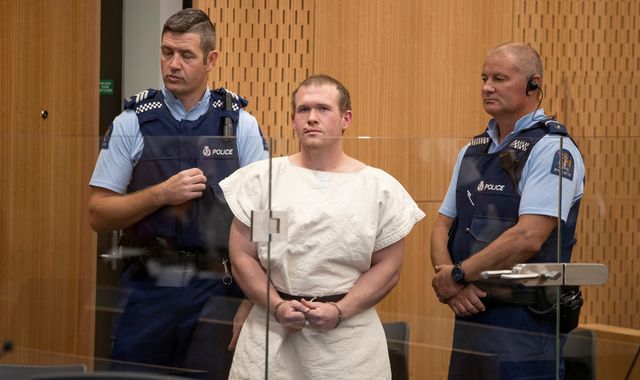 The gunman who killed dozens of worshippers at two New Zealand mosques last year has sacked his lawyers and will represent himself when he is sentenced next month.

Australian white supremacist Brenton Harrison Tarrant, 29, pleaded guilty in March to 51 counts of murder, 40 of attempted murder, and one count of terrorism following the shootings in Christchurch on 15 March 2019.

Prime Minister Jacinda Ardern described the attacks - the deadliest in the country's modern history - as "one of New Zealand's darkest days".

The shootings prompted the government to rush through new laws banning most semi-automatic weapons.

Tarrant was due to go on trial in June, with his change in plea coming as a surprise and a relief to survivors and the victims' relatives.

On Monday, his lawyers asked the High Court in Christchurch for permission to withdraw as his counsel, which they said he had requested.

Some of the survivors attended the session, where Tarrant appeared via video-link from jail in Auckland.

A judge approved the request, saying he was satisfied Tarrant understood his right to legal representation and wished to waive that right.

A lawyer will still be appointed by the court to provide advice if he requests it.

His sentencing, beginning on 24 August, is due to last for up to three days, following the attacks at the Al Noor mosque and the Linwood Islamic Centre last year.