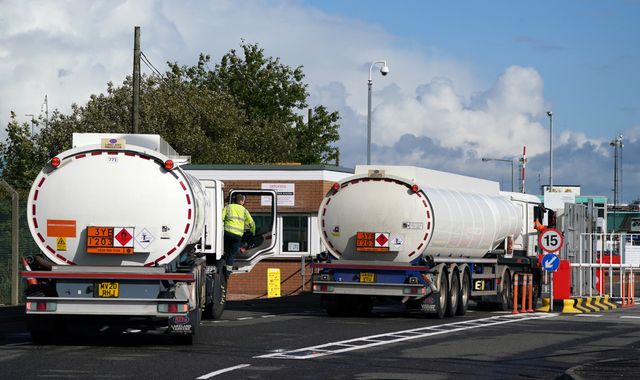 Oil prices have topped $80 a barrel for the first time in three years while wholesale gas costs have surged dramatically again - likely adding to pressure on drivers and household energy bills in the months ahead.

Brent crude rose for a sixth day in a row as concerns over global supply coincide with more countries, such as Japan, easing COVID-19 restrictions, which is likely to boost demand.

UK wholesale gas costs for October delivery were up 10% on Tuesday above 211p-per-therm - leaving the price 520% higher on the same month-ahead period a year ago, according to data from ICIS.

However, there was some rare cheer on the wider energy crunch later in the day as it emerged that the owner of the Stanlow oil refinery - which supplies about one-sixth of the country's road fuels - had struck a deal with HM Revenue & Customs over a big deferred tax bill to remove immediate questions about its future and ability to handle supplies.

The web of energy challenges facing the country are not exclusive to the UK but it is facing additional hurdles in the wake of Brexit as economies recover from the coronavirus-driven slump of 2020.

The pressures were also blamed for a hit to the value of the pound on Tuesday and 2% fall in the FTSE 250 share index as investors continue to fret over the prospects for UK growth.

Oil prices are rebounding after Brent crude dipped below $20 a barrel last year in the early days of the pandemic - and a separate US benchmark, WTI, even briefly turned negative.

Analysts warn the latest price shifts for oil and wider energy could add to accelerating price rises for UK consumers, at a time when inflation is already at a nine-year high and the Bank of England expects it to top 4% by the end of the year.

While Brent costs fell back below $79 later on Tuesday, motorists are currently enduring an eight-year high for fuel prices and a further headache as panic-buying - sparked by worries about a shortage of fuel tanker drivers - creates long queues at forecourts.

The RAC, the motoring organisation, has accused "a small number of retailers" taking advantage of the situation by hiking prices.

The government has said the army is on standby with soldiers at "increased preparedness" to help deliver fuel if necessary.

But ministers and petrol retailers are hoping that after motorists drained pumps in recent days there will be a return to calm.

The panic-buying has led to industries from taxi drivers to the meat processing sector - and even non-league football - facing difficulties and prompted calls for health workers to get priority.

It adds to a cocktail of supply chain problems already created by the HGV driver shortage as well as the gas price spike across Europe that has led to the collapse of a series of smaller energy companies.

Among the pressures on energy supply has been a lack of wind to generate renewable power, weak gas stocks after a cold end to last winter and stiff competition for raw energy globally - with some analysts accusing Russia earlier this month of being part of the problem by withholding some contracted gas stocks from Europe.

The gas price rise and petrol shortages were partly blamed for a hit to the value of the pound on Tuesday - falling more than one-and-a-half cents against the dollar to $1.35 - as they were seen as risks to the UK's growth expectations by financial markets.

Bank of England governor Andrew Bailey has warned the UK economy is entering "hard yards" as inflation pressures grow and the recovery weakens.

He joked that when notified of this latest setback on fuel he was tempted to ask "and when are the locusts due to arrive?".

The Bank governor acknowledged that recent evidence had strengthened the case for a "modest tightening of policy" - that is, raising interest rates or scaling back the Bank's £895bn bond purchasing programme to try to rein in inflation.

AJ Bell financial analysts, Danni Hewson, said of the situation: "What's rapidly dawning on many households is that the price pressures are only just making their presence felt.

"Companies have been talking for months about supply snarl ups, warning that the costs would have to filter through eventually, well eventually is finally here.

"And as often is the way, the hard stuff comes just as the support is drying up. Furlough has just days to run and whilst the fizzing jobs market does make the prospect slightly less daunting anyone facing the loss of a job will be nervous about what the future holds."