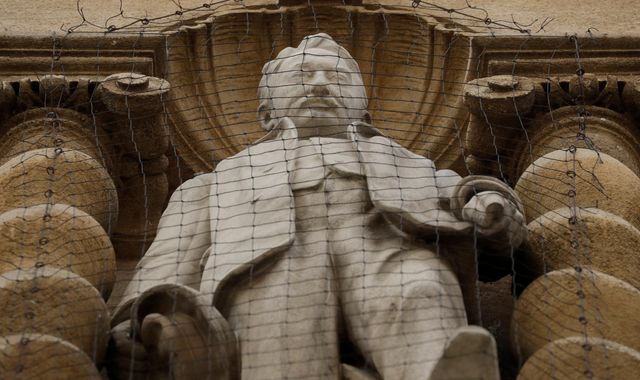 Oxford University's vice chancellor has criticised academics for choosing to "punish students" by refusing to give tutorials in protest over a decision not to remove a statue of colonialist Cecil Rhodes.

More than 100 lecturers are boycotting requests to teach undergraduates at Oriel College, accused of "institutional racism" after its governing body said it would not move the controversial monument of the British imperialist from outside the building.

The academics have also vowed not to help the college with its outreach work and admission interviews, or speak at talks, seminars and conferences that it sponsors.

One of the academics behind the boycott, professor of geography Danny Dorling, said: "Having your university associated with a statue of a racist is deeply upsetting and puts a smear on the whole university."

But Professor Louise Richardson, vice-chancellor of the University of Oxford, said she was "deeply disappointed" that some of her colleagues would disrupt students' learning in protest.

And Downing Street had already warned that students whose teaching has been disrupted by the protests could be liable for compensation.

A No 10 spokesman said universities had a duty to provide good quality teaching - and the government would expect "appropriate action" to be taken if that was disrupted.

A statement from the boycott organisers said: "Faced with Oriel's stubborn attachment to a statue that glorifies colonialism and the wealth it produced for the college, we feel we have no choice but to withdraw all discretionary work and goodwill collaborations."

It added: "The collegiate university can only effectively and credibly work to eradicate racism and address the ongoing effects of colonialism today if all the colleges do so."

Robert Gildea, professor emeritus of modern history at Oxford, is another one of the petition signatories.

"One of the options offered by the commission was to retain and contextualise, so if the college put up a notice explaining who Cecil Rhodes was that would be fine," he told BBC Radio 4's Today programme..

"If the college put a placard around his neck at lunchtime today saying 'sorry', that would also be fine."

An independent inquiry to examine Rhodes' legacy was set up in June last year. It came after the governing body of Oriel College "expressed their wish" to remove the monument.

But the college decided last month against pulling the statue down, stating how the timeframe and cost would be "considerable obstacles".

The decision was branded "an act of institutional racism" in a statement from the Rhodes Must Fall campaign.