Prince George: Photo to mark his eighth birthday shows him on Land Rover in 'tribute to Duke of Edinburgh' 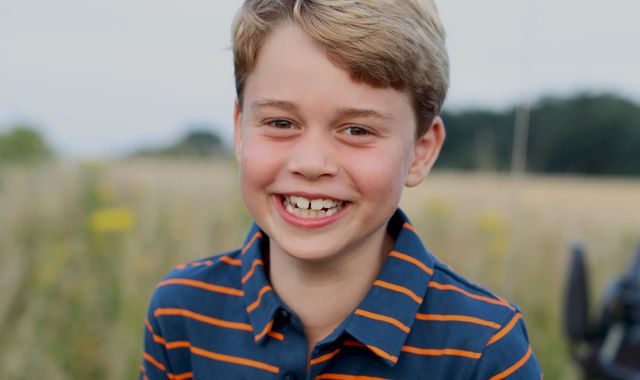 Prince George is pictured sitting on a Land Rover - the car closely associated with his great-grandfather the Duke of Edinburgh - in a new photograph to mark his eighth birthday.

It shows the prince, who celebrates his birthday on Thursday, with a beaming smile as he perches on the bonnet of a Land Rover Defender against the backdrop of a field.

The duke, who died in April, regularly drove vehicles by the British 4x4 brand.

His coffin was carried on a specially adapted Defender - that he himself helped design - during his funeral at Windsor Castle in April.

The choice of a Land Rover in the picture, which was taken by the Duchess of Cambridge, will be seen by many as a tribute to Philip.

Kate is a keen photographer and regularly produces images of her children to mark moments in their lives.

Her latest picture was taken earlier this month in Norfolk where their family home, Anmer Hall, is located - close to the Queen's Sandringham estate.

A smartly-dressed Prince George was recently seen with his parents cheering England on at several of their Euro 2020 games, including the final against Italy at Wembley.

The future king is third in line to the throne behind Prince Charles and Prince William.

His birth in 2013 drew worldwide media attention, with hordes of reporters and well-wishers gathering outside St Mary's Hospital in London to get a first glimpse of the prince.

(c) Sky News 2021: Prince George: Photo to mark his eighth birthday shows him on Land Rover in 'tribute to Duke of Edinburgh'