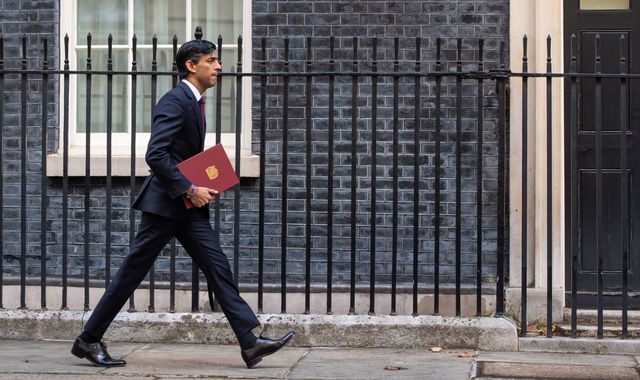 The last nine months have been dominated by the health emergency of coronavirus.

We've stocked up on hand sanitiser and searched for the most comfortable face mask.

We've become so horribly familiar with the weekly choreography that we know which days of the week have the highest death tolls and when to expect a news conference from the prime minister.

Chris Whitty and Sir Patrick Vallance make such regular appearances in our living rooms that we feel on first name terms (or in the case of JVT, initials are enough).

And the politics, too, has been dominated by the health crisis - ordering lockdowns, spending billions on contracts, furloughing, shielding the NHS at all costs.

But this week, the previously all-encompassing health emergency will have to shift to make space. It won't be a pivot - the situation is still too perilous for that - but the developing economy can be ignored no longer.

On Sophy Ridge on Sunday this week we'll be speaking to Chancellor Rishi Sunak ahead of next week's Spending Review, which will lay bare the full extent of the economic crisis.

Around 10 million jobs have been furloughed throughout the crisis - with the government stepping in to directly pay up to 80% of their wages. The scheme has been extended - at significant cost - until the end of March.

Wednesday, when Mr Sunak will put forward the one year spending review, will be dominated by the appalling public finance figures.

And his immediate challenge will be to at least begin to set out a plan to rebalance the books, with an expected public sector pay freeze and spending restraints across government departments (not an easy sell for a prime minister and a chancellor who promised an end to austerity).

Rebalancing the finances is a colossal task. But there is an even bigger challenge for the chancellor: charting a road for the economy out of the devastation that coronavirus has caused.

The Treasury is increasingly worried about the longer-term economic consequences of the pandemic.

Some industries - airlines being the obvious example - may never fully recover. Others such as hospitality and events will take time to get back on their feet. Where will the jobs of the future come from instead?

There is also a concern about the unprecedented move to home working - a situation that many are embracing.

But if major corporations have proved that their staff can effectively work remotely, there will be consequences.

If proximity to the office is no longer an issue, British workers will no longer be competing for jobs against people who can base themselves in the UK, but those in Beijing, Bangladesh or Brazil as well.

What will this mean for employment in the future? How do we build an economy fit for the post-COVID world?

They are questions that at some point the chancellor must answer.

Watch Sophy Ridge On Sunday live from 8.30am on Sunday, followed by Sophy Ridge: The Take at 9.30am.

(c) Sky News 2020: Rishi Sunak must plot a route out of the economic devastation caused by COVID