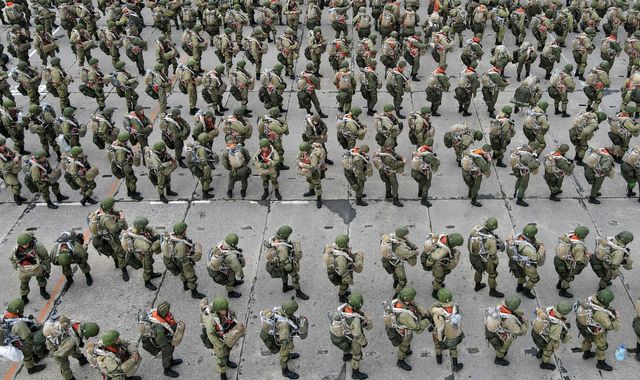 Russia is pulling troops back from an area near its border with Ukraine, in a move which will cool tensions in the region and also with the west.

Tens of thousands of soldiers had been in the area in what Russia said was a training exercise.

The country's defence minister said he had ordered troops to return to their home bases by 1 May after completing an inspection of them.

Ukraine's president Volodymyr Zelensky visited Donetsk near the Russian border earlier this month amid tensions between the neighbouring states.

As well as the build-up along the border with eastern Ukraine, Russian troops were also said to be carrying out war games on the Crimean peninsula.

Russian-backed separatists have been fighting the Ukrainian government in the region of Donbas on the border between the two countries since 2014.

This is the same year that Russia annexed Crimea from Ukraine.

In a tweet, President Zelensky said the country "welcomes any steps to decrease the military presence & deescalate the situation in Donbas", adding he was "grateful to international partners for their support".

His spokeswoman said earlier this month that more than 40,000 Russian troops had gathered on the border, and another 40,000 were in the disputed peninsular.

Subscribe to Into The Grey Zone podcast on Apple Podcasts, Spotify, Spreaker

She added that around 50,000 of those were new deployments.

Russia did not reveal their troop numbers.

It is not only President Zelensky breathing easier tonight.

NATO nations, even though they have no Article 5 pledge of protection for Kiev, must have experienced a collective sigh of relief at the announcement from Russia's defence minister that his troops on exercise in Crimea had proved themselves as ready as they'd ever be and that he was sending them back to their bases, at least those from Southern and Central Command.

Russia's exercises are over but NATO's have only just begun.

Defender Europe-21 is currently under way, billed by NATO command as a way to hone their forces in the strategically-important Balkan and Black Sea regions. They continue through till June.

You can see why Russia is agitated. There is no smoke without fire.

President Putin's rationale for his troop build-up is best known to him alone. Certainly Moscow seems to have taken the decision to stand down.

It has won no concessions from Kiev beyond scaring Zelensky, so in that sense coercive diplomacy seems to have paid no dividends with Ukraine.

But it did secure that all-important phone call with US President Joe Biden - which included an offer of a US-Russia summit and, importantly for Putin, no mention of his jailed arch-nemesis, Alexei Navalny.

The crisis around the Russian-backed separatist regions in Donbas and the long-standing conflict between Kiev and Moscow is not over but the offer of a meeting in Moscow is as much of an olive branch as Zelensky can expect.

We have rowed back from a possible war.

Perhaps it will only be years from now that we know how close we came.

(c) Sky News 2021: Russia pulling troops back from near Ukraine border in move that will cool tensions in region