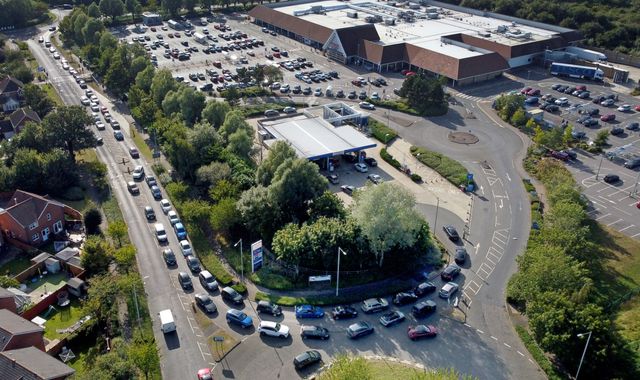 Business leaders have said a visa scheme aimed at fixing a shortage of HGV drivers "will not be enough".

The government is trying to ease supply chain pressures that have seen people queueing for petrol and shops struggling to fill their shelves around the country.

The measures announced so far include:

• 5,000 fuel tanker and food lorry drivers being allowed into the UK from overseas for three months until 24 December

• 5,000 poultry workers being allowed into the UK on the same terms

But the UK has an estimated shortage of 100,000 HGV drivers, according to the Road Haulage Association (RHA).

Andrew Opie, director of food and sustainability at the British Retail Consortium, said the measures "will do little to alleviate the current shortfall".

"Supermarkets alone have estimated they need at least 15,000 HGV drivers for their businesses to be able to operate at full capacity ahead of Christmas and avoid disruption or availability issues."

Mr Opie called for the programme to be extended to HGV drivers in all sectors of the retail industry.

British Chambers of Commerce president Baroness Ruby McGregor-Smith said the visa scheme was "insufficient", adding that it would not save consumers and businesses from "another less than happy Christmas".

The Conservative peer said: "Even if these short-term opportunities attract the maximum amount of people allowed under the scheme, it will not be enough to address the scale of the problem that has now developed in our supply chains.

"This announcement is the equivalent of throwing a thimble of water on a bonfire."

Richard Walker, managing director at Iceland supermarket, said: "I'm sure I speak for all retail leaders in saying that this announcement is critical in terms of easing the situation and quickly getting much-needed stock through supply chains - and it's about time.

"It is unfortunate that this situation has now created a fuel crisis."

He called for key workers to get priority when buying petrol for their vehicles, adding: "HGV drivers are skilled workers and their contribution to keeping the country going should never be underestimated again."

Transport Secretary Grant Shapps said: "This package of measures builds on the important work we have already done to ease this global crisis in the UK, and this government continues to do everything we can to help the haulage and food industries contend with the HGV driver shortage.

"We are acting now but the industries must also play their part with working conditions continuing to improve and the deserved salary increases continuing to be maintained in order for companies to retain new drivers.

"After a very difficult 18 months, I know how important this Christmas is for all of us and that's why we're taking these steps at the earliest opportunity to ensure preparations remain on track."

RHA managing director Rod McKenzie told Sky News that the pandemic had seen many foreign HGV drivers return to their home countries and the "vast majority" have not returned.

The "uncertainty of Brexit and future rights to live and work in the UK" forced many drivers to leave the country, the organisation said.