Taiwan: How much disruption are Chinese military drills causing in one of the world's busiest shipping lanes? 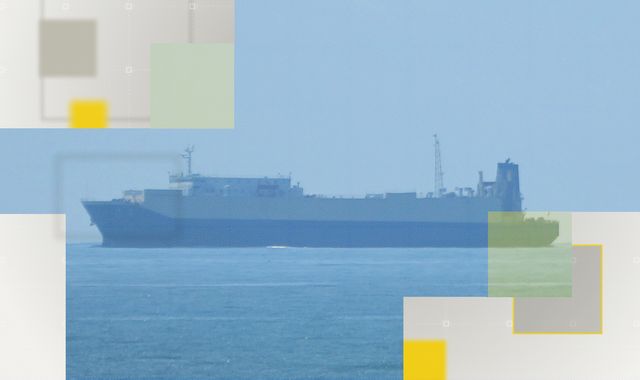 Ships travelling in one of the world's busiest shipping regions have been forced to avoid areas totalling nearly 10,000 square miles, as China conducts military exercises around Taiwan.

Taiwanese authorities have asked vessels to avoid six zones where Chinese military drills are taking place, some of which are in or near the usually packed Taiwan Strait, until operations finish on Sunday.

The military exercises are one of numerous retaliatory actions by China in response to US Speaker Nancy Pelosi's visit to Taiwan.

But shipping analysts say that while some vessels have been re-routed, the impact on the global supply chain is expected to be minimal.

This region is of huge importance for the world's shipping industry. Its key artery is the Taiwan Strait, which sits between mainland China and the island of Taiwan.

"All types of ships pass through the Taiwan Strait as it is the route to and from China and Korea for all vessels sailing from and to the West," said Niels Rasmussen, chief shipping analyst at the international shipping association BIMCO.

Most vessels passing through the corridor are carrying raw materials to factories in East Asia, or are transporting finished goods from the region to the rest of the world.

Three of the military practice zones are in or near to the Taiwan Strait. It's not uncommon for shipping companies to factor active military exercises into their route planning, but it's unusual for drills to take place in commercial shipping areas.

"What is different with these drills is that they are happening in such a concentrated and heavily used area. Typically, you would not conduct drills in the middle of a very busy shipping lane," said Emily Stausbøll, shipping analyst at shipping services company Xeneta.

One of the exclusion zones spans 800 square miles in the Taiwan Strait between the island's northwestern coast and Pingtan Island, which is just off mainland China.

At 10am UTC (universal time) on 29 July, around 17 vessels are visible in the area. Most of them are carrier ships or tankers travelling through the well-trodden trade route.

But move the white button on the image above and you can see that at the same time on 4 August, eight hours after the military exercises began, the area is empty.

"Vessels will have to sail alternative and longer routes to go to Taiwanese ports and some vessels have apparently already decided to sail east of Taiwan instead of sailing through the strait," said Mr Rasmussen.

Another exclusion area is situated just 15 nautical miles from the entrance to one of Taiwan's major ports, Kaohsiung.

On 30 July, at least 30 vessels were in the region. The port can be seen close by, where many ships appear to be gathered.

But at the same time on 5 August, the number of ships is far fewer and just one vessel appears to be on the perimeter.

However, Lloyd's List Intelligence reports that there has been no reduction in port calls nor has there been any further reports of disruption to ports in Taiwan.

The impact is largely being felt through detours around Taiwan's eastern coast, which analysts say are inconvenient but manageable.

"Delays are obviously never good and especially not for a supply chain that has been riddled with delays for a long time," said Mr Rasmussen.

"That said, if the exercise ends on Sunday with no incident it will only be a small share of the world's fleet that has been delayed by a relatively small amount.

"Small speed increases in the vessels' onward schedule should be able to make up for these delays during the next month or two."

The Data and Forensics team is a multi-skilled unit dedicated to providing transparent journalism from Sky News. We gather, analyse and visualise data to tell data-driven stories. We combine traditional reporting skills with advanced analysis of satellite images, social media and other open source information. Through multimedia storytelling we aim to better explain the world while also showing how our journalism is done.

(c) Sky News 2022: Taiwan: How much disruption are Chinese military drills causing in one of the world's busiest shipping lanes?