TBE: Rare tick-borne disease that can cause paralysis and meningitis found in UK 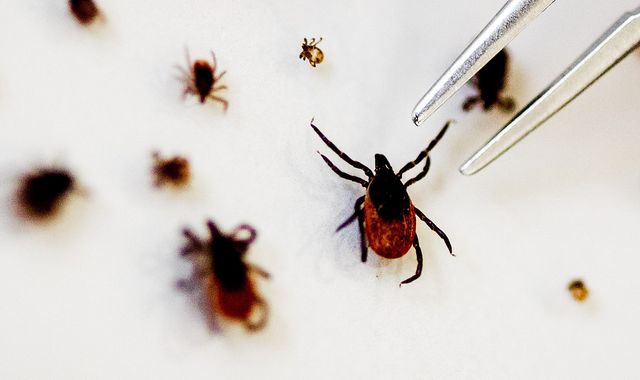 Cases of two rare infections caused by bites from infected ticks - one of which can lead to meningitis, encephalitis and paralysis - have been diagnosed in England, health officials have revealed.

The more serious one is a case of tick-borne encephalitis (TBE), a viral infection that affects the central nervous system and can cause a range of serious illnesses, Public Health England (PHE) said.

The other patient has babesiosis, caused by a parasite which infects red blood cells that can lead to flu-like symptoms.

Both are very rare in the UK; it is the first time a case of babesiosis acquired in the UK has been recorded and only the second instance of a UK-acquired case of TBE.

PHE said in a statement on its website: "Both patients have been transferred to hospital, where they are receiving appropriate treatment and supportive care."

Staff have collected and tested "hundreds" of ticks from sites in Devon close to where the person with babesiosis lives, PHE said, adding that "all tested negative for the parasite which causes babesiosis".

Inspectors have also "tested deer blood samples from Hampshire in areas near to where the person with probable TBE lives and they have shown evidence of likely TBE virus infection, which matches similar results found in 2019".

The risk of babesiosis or TBE for the general public is very low.

However, a number of infections can develop following a tick bite, including Lyme disease, which remains the most common tick-borne infection in England.

PHE said most people with babesiosis "will have either no symptoms or mild symptoms of infection".

But "people with weakened immune systems can become very ill and present with flu-like symptoms such as fever, chills, muscle ache, fatigue, and jaundice".

Similar symptoms are evident in anyone with TBE in the first phase of infection, but the second phase is more serious as it affects the central nervous system and can lead to meningitis, encephalitis and paralysis.

Two-thirds of sufferers will have no symptoms.

(c) Sky News 2020: TBE: Rare tick-borne disease that can cause paralysis and meningitis found in UK