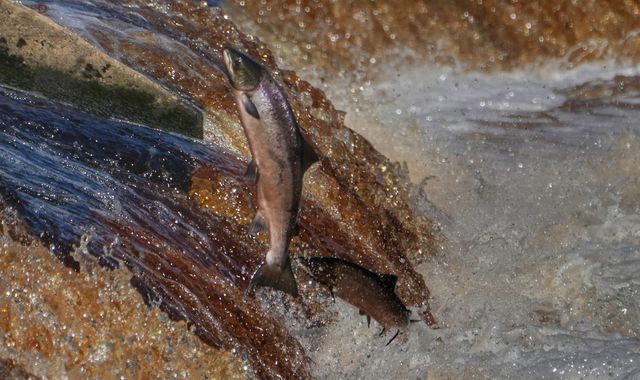 Nearly a third of fish living in rivers and lakes around the world are facing extinction as their habitats are in "catastrophic decline", a report has warned.

Freshwater species, which make up more than half of the world's fish species, are central to the livelihoods of 60 million people and the diets of many others.

Some 30% of the 10,336 fish assessed by the IUCN Red List of Threatened Species are at risk of extinction, according to a report from 16 organisations including WWF and the Zoological Society of London (ZSL).

Populations of migratory freshwater fish have fallen by 76% since 1970, while 80 species have been declared extinct.

Burbot and sturgeon are already extinct in the UK, the European eel is critically endangered and salmon have seen significant declines since the 1960s.

Much of the decline in the UK has been driven by the poor state of habitats, with none of England's rivers meeting "chemical standards" for water quality last year.

This is thought to be a result of agricultural pollution, dams and sewage, WWF said.

Globally, similar habitats face threats such as destruction, dams on free-flowing rivers, too much water being taken for agriculture, and pollution.

Fish are also threatened by destructive fishing practices, overfishing, the impacts of climate change, wildlife crime, mining for sand in their habitats and the introduction of non-native species.

WWF has urged the UK government to support an emergency recovery plan for freshwater wildlife which has been drawn up by a global team of scientists.

The plan would include measures such as reducing pollution, ending overfishing, controlling invasive species and allowing rivers to flow more naturally.

Dave Tickner, chief adviser on freshwater at WWF, said: "Freshwater habitats are some of the most vibrant on earth, but - as this report shows - they are in catastrophic decline around the world.

"Nature is in freefall and the UK is no exception: wildlife struggles to survive, let alone thrive, in our polluted waters."

A Defra spokesperson said: "We remain committed to working closely with water companies, farmers and the fishing industry to restore healthy fish stocks and habitats both through domestic action and international working."