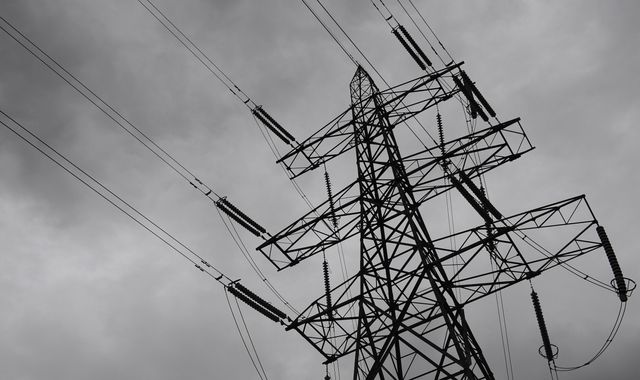 The energy watchdog has moved to reassure customers of two failed household suppliers as wholesale price contracts hit record levels, threatening a leap in bills in and even after the winter months ahead.

Ofgem said the demise of Utility Point - first reported by Sky News - and People's Energy meant their respective customer bases, totalling more than half a million, would fall under its 'safety net' protocol where a supplier is appointed to take them on.

It marked a further deterioration in the domestic supply market that has now seen four companies collapse this month alone amid a natural gas crunch.

Experts have pointed to difficulties restoring stocks following a cold end to last winter, exacerbated by low levels of wind over the summer forcing up demand for gas.

Gas-fired power accounts for almost half of the UK's electricity generation.

Crucially, even October contracts were at similar levels - a new record high - after crossing the 100p barrier in July.

Tom Marzec-Manser, the lead European gas analyst at ICIS, said prices across the winter were not far behind and Europe as a whole faced ballooning costs as jitters grow over the availability of liquefied natural gas (LNG) to keep the lights and boilers on.

"Gas storage units - which are crucial for meeting peak winter-time demand - are only 67% full.

"The three year (pre-COVID) average for fullness for this time of year is 82%", he said.

"The supply of LNG to Europe this summer has not been as high as in previous years, as rebounding demand in Asia and South America has meant these markets have been able to outbid Europe.

"At the same time, Russian gas pipe supply to western Europe - which along with LNG is historically more flexible and would typically be relied upon to cover shortfalls in supply - has not recovered to pre-COVID levels."

Demands on the UK grid have already forced coal-fired stations to be utilised at short notice at a greater cost to the environment but also the system operator National Grid.

The gas shortfall is set to be reflected in household bills in future as consumers' fixed price deals expire.

An Ofgem spokesman warned: "We do expect that gas prices will remain high for some time, unfortunately putting pressure on both customers and energy companies."

Homes are already grappling the effects of higher inflation - much of it a consequence of rising energy costs since economies got back in gear following COVID-19 disruption.

While the Bank of England expects this period of rising prices to be temporary, Ofgem confirmed last month that the energy price cap on so-called default tariffs would rise by at least £139 from October, affecting 15 million families.

That was to take account of wholesale costs rising by 50% over six months despite warnings it could push an additional half a million homes into fuel poverty at a time when the Universal Credit uplift of £20 a week will have ended.

The failure of challenger suppliers - seven this year - can be attributed to wafer thin profit margins being eroded by rising energy costs with smaller companies also not having the capital behind them to fully hedge their positions.

Neil Lawrence, Ofgem's director of retail, added: "Although the news that a supplier going out of business can be unsettling, Utility Point and People's Energy customers do not need to worry.

"Under our safety net we'll make sure your energy supplies continue. If you are a domestic customer with credit on your Utility Point or People's Energy account this is protected and you will not lose the money that is owed to you.

"Ofgem will choose a new supplier for you and while we are doing this our advice is to wait until we appoint a new supplier and do not switch in the meantime.

"You can rely on your energy supply as normal. We will update you when we have chosen a new supplier, who will then get in touch about your new tariff."

Utility Point had accused Ofgem of playing a role in its collapse.

Chief executive Ben Bolt told Sky News earlier on Thursday: "Recent international and national circumstances have created a perfect storm of events in the energy market which has meant that Utility Point has not been able to find a buyer for its business.

"Wholesale energy prices have soared to record levels and with the added price cap on default tariffs, the costs of supplying energy have increased dramatically.

"With every supplier undercharging for energy means that the fair cost that the regulator was trying to encourage has in fact had the opposite effect.

"This mix of unfortunate circumstances and lack of commercialism in the industry made it impossible to continue.

"Our priority is with our 200 colleagues in Poole and Bournemouth, who have fought hard in the face of tough challenges and helping 225,000 customers transfer to another energy provider with minimal disruption."