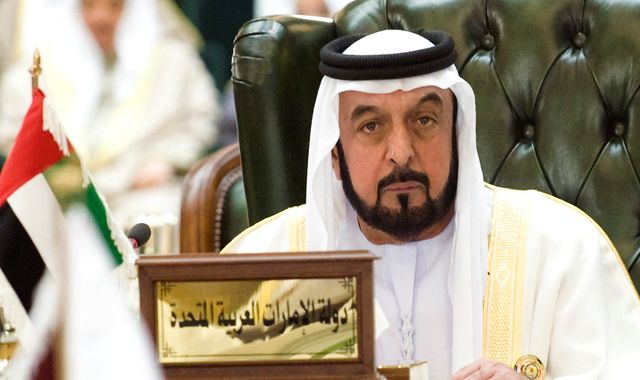 Sheikh Khalifa bin Zayed Al Nahyan, the president of the United Arab Emirates, has died at the age of 73.

A pro-Western moderniser, he was known for aligning the Gulf State closer to the US and its allies.

He oversaw much of the country's economic growth and bailed out debt-ridden Dubai during its financial crisis more than 10 years ago.

Sheikh Khalifa also helped fund the world's tallest building, Burj Khalifa, which was named after him.

He became president in 2004 - but suffered a stroke and had emergency surgery a decade later and stopped being involved in the day-to-day affairs of ruling the country.

He had rarely been seen in public since.

During the last few years of his life, his half-brother, Abu Dhabi Crown Prince Mohammed bin Zayed, became the de-factor ruler and decision-maker of major foreign policy decisions, like joining the Saudi-led war in Yemen and leading an embargo on Qatar in the past few years.

"The UAE has lost its righteous son and leader of the 'empowerment phase' and guardian of its blessed journey," Sheikh Mohammed said.

US Secretary of State Anthony Blinken called Sheikh Khalifa "as a true friend of the United States", adding that the US remains committed to its steadfast friendship and cooperation with the UAE.

Relations between the Biden administration and the UAE have been strained over the country's refusal to join US efforts to isolate Russia following its invasion of Ukraine.

The UAE announced a 40-day period of mourning and a three-day suspension of work across the government and private sector.

No details were announced about the nature of Sheikh Khalifa's death or about who will replace him but Sheikh Mohammed is widely expected to claim the presidency.

The crown prince, also the deputy supreme commander of the armed forces, brought the UAE closer to Israel after the two countries normalised relations in 2020.

He has also fought a rising tide of political Islam around the region.