Uighur woman breaks silence as her fears grow: 'If our genocide is fake, then where is my husband?' 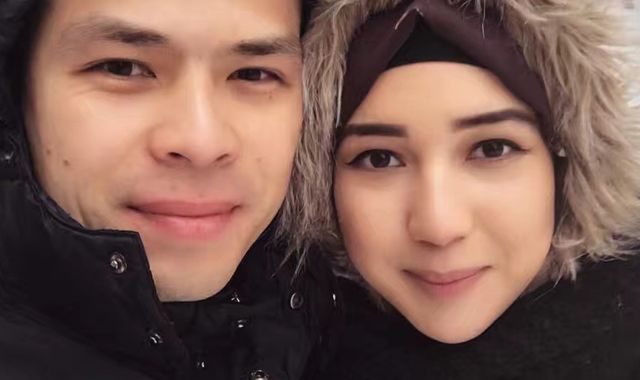 Australian-born Mehray Mezensof has been married to her husband, Mirzat Taher, 30, for almost five years.

But he has been absent for most of this period.

The 27-year-old told Sky News the young couple have only spent 14 months of their marriage together, as Mr Taher was in and out of China's so-called "vocational education and training" schools and detention centres - which some US officials have referred to as "concentration camps".

On 1 April this year, he was sentenced to 25 years in jail, for involvement in alleged "separatist" political activities in Turkey.

She says the claims are "ridiculous" - and based on suspicion, rather than factual evidence.

Sir Iain Duncan Smith, co-founder of the Inter-Parliamentary Alliance on China, is calling on the G7 to act - and soon.

He told Sky News that the UK, as a host of the summit, has a duty to speak out against the "genocide" happening "right under our noses".

Sir Ian said Britain can "no longer turn a blind eye" to China's abuse towards its Uighur and minority populations and must "reconsider how we trade" as the UK and other Western countries are too dependent on China.

The former Conservative party leader says the Western world "allowed" China to join the free market without adhering to principles of democracy, the rule of law and human rights - what Francis Fukuyama termed "the end of history" - and the G7 now has the opportunity to fix this.

"In the chase for cheaper production… the 'greedy route' as I call it… we relied on an anti-democratic and brutal government… but we cannot separate business and trade from human rights."

Ms Mezensof has kept quiet up until now to protect their family, and with the hope that the Chinese Communist Party would release her husband sooner, if they were seen to be "co-operating".

She said: "My husband is a good person. He isn't a criminal. He isn't political. He hasn't done anything wrong, he's innocent."

His only crime, she told Sky News, is being ethnically Uighur.

According to Amnesty International, an estimated one million people, most of them Uighurs - a Muslim ethnic group living largely in the northwest Chinese province of Xinjiang - are believed to have been detained inside "re-education camps" by the Chinese authorities since 2017.

Although the UK government has declined to get involved, MPs in April passed a motion declaring Uighurs are being subjected to "genocide" and "crimes against humanity" in China.

The first steps of an independent "people's tribunal" in the UK was under way last week, to decide if this is true.

It heard that Uighurs are treated "worse than dogs" and "tortured day and night" in Chinese camps in Xinjiang.

Ms Mezensof was born and raised in Melbourne, Australia. Her parents emigrated from the Xinjiang region in northwestern China more than 35 years ago.

When she was 22, she travelled for the first time to the region's main city, Urumqi, and met Mr Taher - a moment she describes as "love at first sight".

After an Islamic ceremony, the couple were married on 3 August 2016 with plans to settle in Melbourne.

Ms Mezensof extended her stay in Xinjiang while they waited for Mr Taher's Australian visa to come through.

At this time - things started to change.

"There were a lot of whispers going around," she said.

"People were disappearing in the middle of the night, police were coming and taking them away. No one knew where they were going, how long for.

"There was constant monitoring, surveillance. Heavy police presence - you'd get stopped on the street a lot to get your phone checked.

"We needed permission from the police to leave the city - you'd have to tell them where you were going, how long for…

"Everyone was on edge."

China's crackdown on Uighurs and other minorities was beginning to ramp up in 2017, and Ms Mezensof's family in Melbourne became increasingly concerned for her safety.

Shortly after Mr Taher was granted a visa on 1 April 2017, the couple immediately booked plane tickets for Australia, due to fly out 11 days later.

However, one day before their flight was due to leave, police turned up at Mr Taher's house and took him away for questioning.

But he did not come home.

Mr Taher was held in a detainment centre for 10 months, and consequently transferred to two different "schools" for "re-education" - where Uighurs who are thought to be "extreme" or "terrorist-like" are sent by state officials.

The Chinese authorities deemed him "dangerous" because he had travelled to Turkey in 2014 and 2015.

It's thought he and other Uighurs in Turkey - who, like him, are ethnically Turkish and not Han Chinese - rallied against the Chinese state with the supposed aim of establishing independence from mainland China, Ms Mezensof understands.

Human Rights Watch report that, during this time, the Xinjiang authorities made foreign ties a punishable offence.

State officials targeted those with connections or travel history to "26 sensitive countries" - including Turkey - and subsequently interrogated, detained, and in some instances imprisoned those people.

However, despite claiming - and demonstrating - his visits consisted of a holiday and opportunity to study Turkish on a student visa, Mr Taher was held by the state for two years, until his unexpected release on 22 May 2019.

He had "graduated" from his "re-education" school and was deemed safe enough to re-integrate back into society.

Several weeks later, the couple reunited at the Urumqi airport.

Ms Mezensof, now on a six month Chinese visa, discovered that her husband, and others with him, were subject to "constant brainwashing" and "propaganda" in the camps.

She told Sky News that contrary to the Chinese state's propaganda videos, her husband did not develop any vocational skills, play sports or attend dance classes.

Rather, inmates were "forced" to learn about the Chinese Communist Party, memorise political speeches and confess their "crimes" to their class on a daily basis.

She said: "It wasn't really physical abuse…. But more mental and psychological.

"If one of them misbehaved - they suffered together. They weren't given food for that whole day, they pretty much starved.

"They were reminded every single day that none of them would ever get to see their family members again… and the only way they would leave is in a body bag, if you die."

The party secretary of Xinjiang, Chen Quanguo, has previously told Sky News that the facilities are tantamount to "boarding schools" - and that claims of "concentration camps" were "made up", "lies" and "very ridiculous".

Mr Taher decided against sharing explicit details of his ordeal with his wife - apart from the one time he accidentally spoke in the Uighur tongue and was handcuffed, strung to a door, and was forbidden to eat or drink.

But, unbeknown to them, they were running - once again - on borrowed time.

Ms Mezensof's six-month Chinese visa was running out, and the couple were struggling to obtain Mr Taher's passport from state officials.

She returned to Melbourne on 30 December 2019 - where she applied for another Chinese visa.

However, the COVID-19 pandemic hit, and Urumqi in Xinjiang was under lockdown. China had closed its borders to foreigners. The couple resorted to keeping in touch on WeeChat.

But on the morning of 19 May 2020 - Ms Mezensof felt uneasy. Her husband hadn't checked or responded to her messages in hours, which she says was very unlike him.

It later transpired that police had taken him from his bed and detained him for a second time - again, about his travels to Turkey.

He was kept in solitary confinement for two months and was in separate quarantine for 40 days after an inmate caught COVID-19.

However just weeks later, he was detained for a third time on 26 September 2020.

Ms Mezensof hasn't heard from his since.

Sky News has seen a notice of arrest issued by Hami police in Xinjiang on 23 October last year.

All she knows - and from her family in Xinjiang - that Mr Taher has been sentenced to 25 years in prison, for accusations of "separatist" activities which he asserts he had no part in.

"I was just sitting there. And I was calculating it in my head being like, it's 25 years.

"So if he were to carry out that full sentence, when he comes out, he'll be 55. And I'll be 52… how can that be like that's our whole youth, our whole lives, just like ripped and taken away from us?

"The moment you get married and you're about to start your life with the person you love, it should be the happiest moment of your life, but instead I've been going through this in silence.

"This isn't something out of a movie, it is happening.

"It frustrates me when people say its fake, because if it was, where is my husband?

"We really wanted to start our own family…"

"It's been over 200 days, since I've had any kind of communication with him. I've been backed into a corner, and there's no way out, besides going public.

"We have no ulterior motive. I just want to be with my husband."

Sky News has contacted Chinese state officials for comment relating to the claims made in this piece, but are yet to receive a response.

(c) Sky News 2021: Uighur woman breaks silence as her fears grow: 'If our genocide is fake, then where is my husband?'