Economic activity picked up to hit a 16-month high in January, a survey suggests, signalling a post-election bounce that could kill off an interest rate cut.

The flash early reading of the IHS Markit/CIPS CIPS composite purchasing managers index (PMI) showed a score of 52.4, up from 49.3 in December.

Any reading above 50 reflects growth.

It was the first expansion reported by the UK private sector in five months, indicating a boost in business confidence following Boris Johnson's landslide election victory.

The preliminary figures showed the large services sector returned to growth in January for the first time since August, while a downturn in manufacturing eased.

The flash services activity index reported a 16-month high of 52.9, as businesses said greater political certainty had had a positive impact on consumer spending.

Meanwhile, the manufacturing output index rose sharply to 49.5, from 45.6 in December, as its contraction significantly slowed.

"Intensifying political and economic uncertainty ahead of the general election has started to ease, encouraging more spending and helping push business expectations of future growth to its highest since mid-2015.

"The uplift in sentiment about the outlook hints at even better growth to come, but confidence needs to continue to rise to ensure this solid start to the year has legs."

The figures may also dampen the likelihood of an imminent rate cut by the Bank of England, following comments from policymakers they were considering taking action to stimulate growth.

Samuel Tombs, chief UK economist at Pantheon Macroeconomics, said: "Markets now see just a 43% chance that the Monetary Policy Committee will cut bank rate on 30 January, down from 50% before the PMI was released and a peak of 75% last week."

Duncan Brock, group director at the Chartered Institute for Procurement and Supply, said: "2020 has started on a positive note with this sudden change in momentum.

"However, that's where the story will end until this uncorked trickle of new orders and activity turns into a flood for businesses hit by hesitancy in the last three years.

"Business activity will need to be buoyed up by the prospect of strong negotiations around the UK's exit from the EU to return them to strength in the years to come." 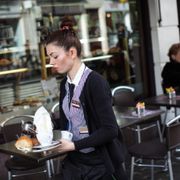 New immigration system looks a lot like the old one