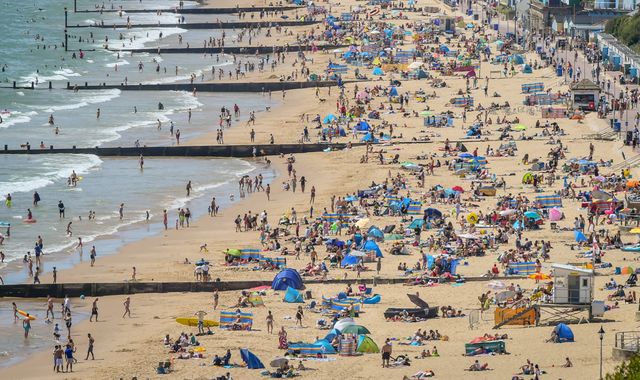 The coastguard recorded its busiest day for more than four years on Friday.

The call outs came as temperatures reached 37.8C (100F) in the South East - the third hottest day in the UK since records began in 1910, the Met Office said.

The Coastguard said problems were mostly about people being cut off by the tide, swimmers getting into difficulty and missing children.

In all, the Coastguard responded to 329 calls, including 22 requiring an aircraft.

In one, a 65-year-old woman was seriously injured after falling 60ft from a cliff edge at Old Harry Rocks near Swanage in Dorset.

The hot temperatures drove thousands of people to beaches up and down the country on Friday, sparking concerns about being able to control social distancing.

Thanet District Council asked people to avoid four of its beaches on Friday after the "exceptional" number of people there became "unmanageable".

Council leader Rick Everitt said: "Early on, it became clear that they were going to reach levels of which we were concerned about.

"The RNLI only have a certain capacity.

"They're on seven Thanet beaches this summer, which is slightly fewer than usual, and they're doing a great job where they are but they don't have unlimited resources to deal with people in the water.

"If you have too many people on the beach, it just becomes unmanageable from that point of view."

Facilities, such as toilets, were not equipped for the number of people visiting on Friday, according to Mr Everitt, adding it would have been better if demand was spread out across the coastline, rather than focused in small areas.

"It's an irony, isn't it, that seaside towns have spent years complaining that people no longer visit them because they go abroad," he added.

Brighton and Hove City Council said that it too was "concerned" about the number of people in the city on Friday, adding there was only limited capacity in the area and asking people to avoid travelling there.

The almost record high temperature was recorded at Heathrow Airport in London.

The weather is expected to cool down over the weekend, making it feel fresher for most of the country.

"The weekend is going to be pretty good," according to Met Office forecaster Simon Partridge.

"Both days are going to be mostly dry across the UK with sunny spells and some showers at times that may be out to the north and the west of the country."