UK weather: Hottest day of the year set to arrive this weekend as Euro 2020 fever sets in 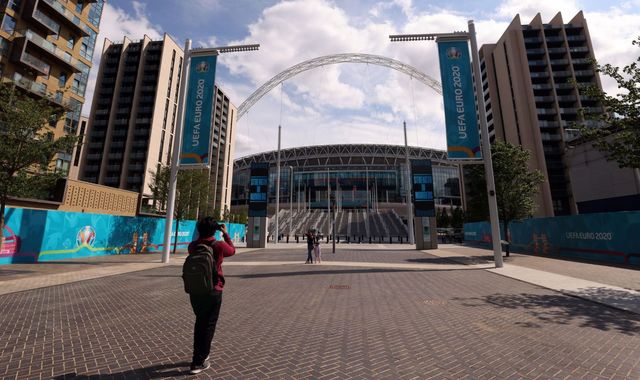 The UK is set to enjoy the hottest day of the year so far this weekend - just as football fever bites with the start of Euro 2020.

Temperatures could hit a new 2021 high of 30C (86F) in parts of the South East by Sunday afternoon, just in time for England's first game of the tournament against Croatia at Wembley.

This would make it the warmest 13 June on record and top the hottest day of the year so far, when the mercury climbed to 28.3C (83F) in Northolt, north London, on 2 June.

Parts of the UK will be hotter than popular holiday destinations such as Ibiza, Mykonos and California due to a "jet stream" moving in from the south - and just as well given that none of those places are currently on the government's green list for foreign travel.

Temperatures will also be warm on Saturday for England, Wales and most of Scotland, up into in the mid-20s in some places over the course of the day, the Met Office said.

That means Wales fans should be able to get their barbecues out for their team's first Euro 2020 game against Switzerland in the afternoon, as it could get as hot as 21C (69.8F).

"Large parts of the UK will experience some fine weather this weekend due to an area of high pressure moving across the country," Met Office forecaster Marco Petagna said.

"I'm afraid Saturday won't be plain-sailing for all, as some areas in Northern Ireland and Scotland will see some cloud and a few showers but elsewhere there will be plenty of sunshine.

"Many places will see highs of 25C (77F) on Saturday, following a cooler start to the day."

Regarding Sunday, Mr Petagna said: "It will certainly be the hotter of the two days for many in the UK."

He said the fine conditions were thanks to "a high-pressure jet stream moving in from the southwest, bringing with it sunshine and warm, dry temperatures".

It's prompted the AA to warn parents and animal owners about the dangers of leaving children or pets in locked cars, saying a dog becomes vulnerable to the heat in less than half an hour.

Despite Wembley hosting all of England's group games this month, the stadium will only be at 25% capacity due to COVID-19 restrictions.

But the tournament will be shown in pubs across the UK with social distancing measures in place - with the warm weather potentially sparking similar scenes to those in the 2018 World Cup when England reached the semi-finals.

Fans will also be able to watch games in dedicated "fan zones" - public viewing events organised by the host cities.

UEFA's official fan zone in England is at Trafalgar Square in London, open to key workers for the first two group games before tickets are allocated through a ballot system.