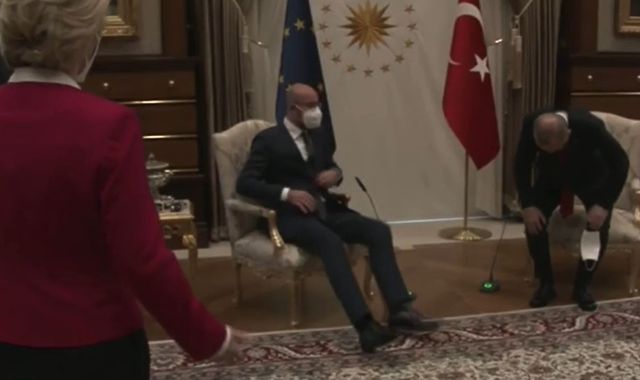 European Commission president Ursula von der Leyen was speechless after being left without a chair during a meeting with Turkey's leader.

A row has broken out after the snub at Tuesday's summit where one of the topics was women's rights.

"Ehm," muttered the former German defence minister, before she was eventually seated on a sofa a little further away from her counterparts and opposite Turkey's foreign minister who is below her in the protocol pecking order.

The awkward scene came ahead of a three-hour meeting with Mr Erdogan where one of the issues raised by the EU leaders was women's rights in light of Turkey's withdrawal from a convention on gender-based violence.

Neither Ms Von der Leyen nor Mr Michel made any mention of the incident in a post-meeting press conference.

"We have come to Turkey to give our relationship a new momentum and in this respect we had an interesting first meeting with president Erdogan," Von der Leyen said.

However, an EU spokesperson said the president should have been seated in exactly the same manner as the president of the council and the Turkish president but decided to "proceed by prioritising substance over protocol".

"We will be making the appropriate contacts to ensure this doesn't happen again in future.

The spokesman added that the incident "sharpened her focus on the issue of [Erdogan's removal of Turkey from] the Istanbul Convention".

And Spanish MEP Iratxe Garcia Perez, tweeted: "First they withdraw from the Istanbul convention and now they leave the president of European commission without a seat in an official visit. Shameful."

She added Turkey had sent a "wrong signal" by leaving the convention on preventing violence against women signed in 2011.

Two Turkish officials told Sky News' Guldenay Sonumut that before Ursula von der Leyen and Charles Michel's visit: "There was a meeting between the EU and Turkish protocol teams and we followed the suggestions made by the EU protocol team".