US presidential debate: Biden and Trump clash on coronavirus and race 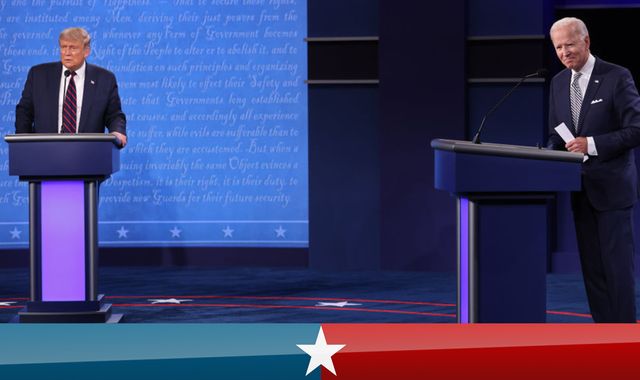 The two men frequently interrupted each other with angry interjections, with Mr Biden eventually snapping at his opponent: "Will you shut up, man?"

When the topic of the coronavirus pandemic came up, Mr Biden questioned Mr Trump's leadership, suggesting he had panicked and failed to protect Americans because he was more concerned about the economy.

"He panicked or he looked at the stock market.

"A lot of people died and a lot more are going to die unless he gets a lot smarter, a lot quicker."

He defended his approach on the pandemic, which has killed more than 200,000 people in the US.

"We've done a great job," Mr Trump said. "But I tell you, Joe, you could never have done the job we've done. You don't have it in your blood."

As the conversation moved to race, Mr Biden accused the president of walking away from the American promise of equity for all and making a race-based appeal.

"This is a president who has used everything as a dog whistle to try to generate racist hatred, racist division," he said.

Moderator Chris Wallace of Fox News asked the president if he was "willing to condemn white supremacists and militia groups and to say that they need to stand down and not add to the violence".

Mr Trump said: "I would say almost everything I see is from the left wing, not from the right. ... I'm willing to do anything. I want to see peace."

Recent months have seen major protests after the deaths of black people at the hands of police.

And the former vice president said there is systemic racist injustice in the US while the vast majority of police officers are "decent, honourable men and women" there are "bad apples" and people have to be held accountable.

Mr Trump in turn claimed that his opponents' work on a federal crime bill treated the African American population "about as bad as anybody in this country".

The president pivoted to his hardline focus on those protesting racial injustice and accused Mr Biden of being afraid to use the words "law and order" out of fear of alienating the left.

The debate ended with a question from the moderator, who asked both candidates if they will "urge your supporters to stay calm during the vote counting period, not to engage in civil unrest and will you not declare victory until the election has been independently verified?"

Mr Trump, who has refused to commit to a peaceful transfer of power if he loses the election, repeated his unfounded allegations that mail-in voting would lead to fraud.

He said he will tell his supporters "to go into the polls and watch very carefully because that's what has to happen. I'm urging them to do it".

Mr Biden replied: "Once the ballots are all counted, that'll be the end of it. If it's me, that's fine. If it's not me, I'll support it."