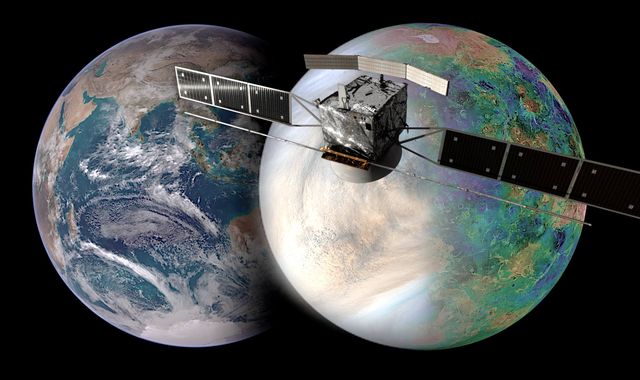 Scientists aim to explore the mysteries of Venus, including whether it was once habitable, with a new space mission.

British boffins will play a leading role in the EnVision project, studying the atmosphere and geology of the planet known as "Earth's twin".

Commissioned as part of the European Space Agency's (ESA) Cosmic Vision programme, the mission into space will cost about of €610m (£524.7m).

It will look at past and present volcanic activity and track gases that are key in sustaining Venus's clouds and environment, as well as find out why Earth is the only planet able to sustain life.

The EnVision orbiter is expected to launch in 2031 and will take 15 months to reach the planet.

Once it arrives, it will spend a further 16 months slowing down, in a process called aerobraking, until it reaches a low circular orbit.

It will start its four-year study using instruments including a sounder to reveal underground layering, and spectrometers to study the atmosphere and the surface.

A NASA-provided radar will also image and map the surface.

Researchers from Royal Holloway, University of London, Oxford University and Imperial College London will work alongside European and American scientists on the project.

Venus is the most Earth-like planet in terms of size, composition and distance to the sun.

Many academics believe the two planets were probably once quite similar, with oceans of molten rock and thick atmospheres of carbon dioxide and steam.

But while Earth evolved to become habitable, Venus may or may not have gone through a habitable stage before developing a greenhouse effect that now cooks its surface to 450C (842F).

UK scientists recently took part in another programme which saw hundreds of worms being sent into space for research on human muscle loss.

Science minister Amanda Solloway said: "I'm proud that once again British scientists have been chosen to play a leading role in a mission that will expand humankind's understanding of the universe."