When 'just calm down' isn't enough: why the government needs to be more transparent over petrol panic 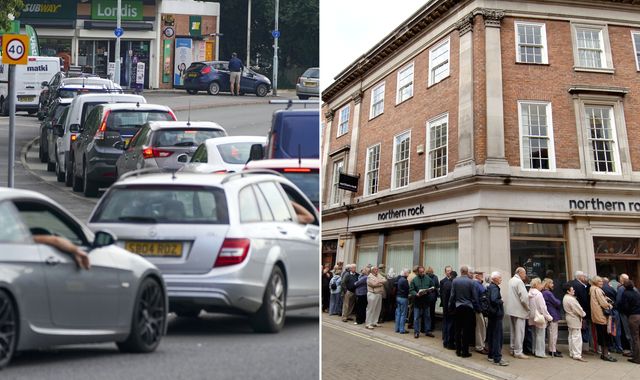 Watching the queues outside petrol stations these past days, one cannot help but be reminded of another moment some years ago when people queued in their thousands in Britain's high streets to withdraw a crucial resource: the bank run on Northern Rock in 2007.

Indeed, there are at least three ways in which this episode is similar, and one very important way in which it is not.

The first similarity is that, like the Northern Rock episode, this looks like a panic, driven by fear.

The second is that such episodes can start very easily but are very difficult to stop.

For all the government's somewhat patronising assurances that people should "just calm down", actually once these things take hold, there is nothing irrational about heading for the pumps and joining the queues.

That brings us to the third similarity with Northern Rock, which is that petrol stations are not unlike bank branches in one important respect: they are not designed to carry enough petrol that everyone in the country could fill their tanks at once.

All banks would be vulnerable to collapse if every one of their customers withdrew their savings at once (since they don't actually hold that much cash in reserve).

The same is true of most businesses and services: they are engineered not for extreme episodes of demand, but for something approximating normality.

But now we get to the important way in which this episode is dissimilar to Northern Rock.

When that bank collapsed the panic was, it turns out, truly justified.

It wasn't just leaks about the bank imminently running out of money, it was well and truly scuppered.

For years, its accounts had underlined that its balance sheet looked increasingly precarious. It, and large parts of the financial system, were essentially broke.

There is nothing to suggest anything even mildly similar is the case for Britain's network of petrol stations.

It's certainly true that the distribution of petrol has been beset in recent months by the same trends being seen elsewhere: a difficulty getting hold of lorry drivers.

These problems run deep and will need to be rectified - though it's worth noting that there are similar shortages of drivers and trucks in Europe and the US.

But there is a big difference between a chronic shortage of drivers and a hole in the balance sheet of a major bank.

And as of the latest data from August, there was still plenty of petrol sloshing around the UK's refineries and petrol stations.

There was no shortage of supply.

And, as far as we know, that was the case even into last week, when a few newspaper stories sparked the panic buying.

At that point, and indeed now, Britain's refineries and petrol infrastructure were still well-supplied.

I say "as far as we know" because while the government has assured us of this, it has yet to release any data proving it.

The least it could do to reassure people in the coming hours and days would be to publish its data on fuel sales and stocks.

There is nothing to stop it doing so - indeed, until recently it published these numbers each week throughout the pandemic.

A little more transparency would go a long way.

(c) Sky News 2021: When 'just calm down' isn't enough: why the government needs to be more transparent over petrol panic