Sixteen animals have been killed by a pack of African wild dogs after they escaped from their compound due to damage caused by Storm Ciara.

A spokeswoman for the park said 12 wild dogs were able to enter a neighbouring compound in the early hours of 9 February and went on to kill six Persian fallow deer and 10 Barbary sheep.

"At no point was there a risk to public safety and there was no danger of any animals escaping the park's perimeter fencing," a spokeswoman said.

She said the wild dogs were returned to their compound unharmed.

"The wild dogs entered the neighbouring compound through a gated entrance which had been damaged in the storm which hit Worcestershire earlier that morning," the spokeswoman explained.

She added: "Given their personal attachment to our animals, our staff are extremely saddened by the incident."

Commenting on the impending arrival of Storm Dennis on Saturday, the spokeswoman said: "We are aware of the current weather warnings in place for this weekend and will monitor this closely, making our decisions, as always, in the best interests of our animals and public safety."

According to the World Wildlife Fund (WWF), the African wild dog is "one of the world's most endangered mammals", with only about 1,400 left in the wild.

The largest populations remain in southern Africa and the southern part of East Africa.

The predator, which gathers in packs, hunts species such as gazelles and can reach speeds of more than 44mph. 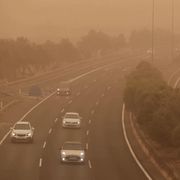 Canary Islands blanketed by 'apocalyptic' sandstorm - grounding flights in and out