Hold Tight: Here's How The Coming Winter Will Affect The Whole UK

Parts of the country that have already been hit badly by strong winds should buckle up as we brace ourselves for more unsettled weather. The next 24 hours are going to be critical!

The Great British public puts up with a lot.

From our trains breaking down due to 'leaves on the tracks', to our buses not being able to handle the slippery roads when it rains, but if there's one thing that unites us all, it's talking about the weather.

So what's in store for the rest of the year?

Well it's not exactly good news!

If you live in the South West, chances are that you'll have already experienced the gale force gusts that have been blowing around the country over the last couple of days.

Well now areas that have already been hit hardest by Storm Angus are set to expect much more wind and rain over the next few days!

The first named storm of the season hit the coast with between 84-97mph winds, leaving thousands in the South of England living without power.

Coastal regions such as Brighton, have been especially battered and the region faces hardcore flooding.

What is more, The Environment Agency, who are preparing to put up temporary defences around rivers, have now also warned that the weather will move North next.

If you're a motorist - be warned - do not drive through flood water!

Meanwhile in Aberystwyth Harbour, things have been a bit all over the place!

The area in West Wales has been left in turmoil after 94pmh hurricane-force winds swipe through the town, leaving utter devastation in its path.

The popular summer holiday resort was battered by the 'tornado' gale force, which ripped trees from the soil, took tiles off roofs and over turned outside furniture.

Check out this terrifying video by Fred Stanton:

Natasha Harris also captured the devastation on camera in this awesomely powerful video:

An ice warning has been issued in the north-west of England, Northern Ireland and western Scotland as temps across the nation plummeted.

Commuters faced travel panics as the sleet and ice made roads perilous to drive down as rain froze and turned them slippery.

Plus snow storms are set to arrive in the UK imminently, forecasters say, starting with the north of England and Scotland this coming weekend.

The mercury is going to drop to sub-zero and a giant whiteout is expected to hit the country and stick around with us for the foreseeable months...potentially lasting over Christmas and up until February. 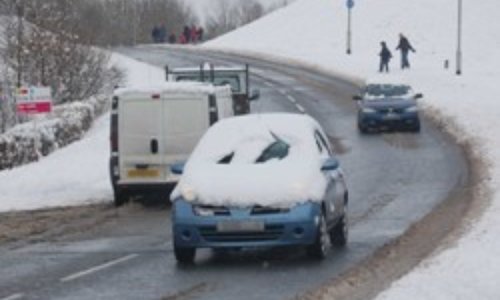 The Met Office are predicting lower than average temperatures and roads and fields covered with ice and snow for the next three months.

Blizzards could sweep the country, no doubt causing mayhem for commuters and trouble on the roads for drivers too.

Forecasters are predicting temperatures falling to as low as -14 degrees!

If the predictions are true, then the cold temperatures will rock the nation, after we've enjoyed fairly mild winters for the last few years.

Where will be worst hit?

Areas that are thought to be worst affected by the Polar Vortex are rural areas of Yorkshire, such as the Dales.

Whilst the Met Office has also named Nottinghamshire as the first place to be hit by show. The areas is currently on a yellow alert on the weather front.

Plus that's not all!

The Met Office wants us all to get involved in NAMING the upcoming storm...because hurricane Holly sounds waaaaay less intimidating right?!

Operation #NameOurStorms aims to raise awareness over any upcoming severe weather conditions and ensure that people stay safe around these times.

The UK’s storms will be named again this #autumn and #winter. Here’s the list for 2016-17 #NameOurStorms pic.twitter.com/GnHBlsIFIu

The competition has been immensely popular with over 10,000 entries already and names like Susan, Malcolm, Valerie and Conor have already been confirmed.