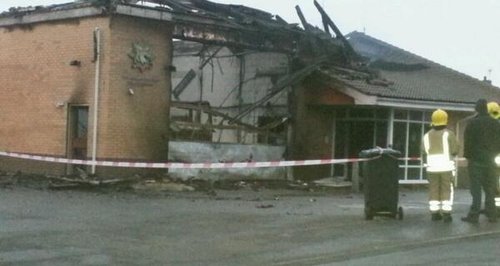 The fire station at Downham Market in west Norfolk has been destroyed by fire overnight.

It broke out about 12.30am this morning (11th March) and the first appliance from King's Lynn arrived on the scene 20 minutes later. Crews from Kings Lynn, Methwold, Swaffham, Littleport, Wisbech, Terrington, the water carrier from Fakenham and the control unit from Wymondham all attended the fire on London Road.

Crews in breathing apparatus used main jets to extinguish the fire. No one was injured.

The fire engine's been destroyed and there has been considerable damage to the building.

An investigation is now under-way to work out what caused it and Norfolk Fire and Rescue Service's recovery plans are now in place.

Downham Market retained crew has been provided with new equipment and a replacement appliance. This is being stationed at the nearby Downham Market police station where a disused part of the station loaned by Norfolk Constabulary is being used to store fire service equipment.

First arriving firefighters saw flames through the windows of the appliance bay, with the fire spreading rapidly within the building. An investigation into the cause of the blaze is now underway.

Chief Fire Officer for Norfolk Fire and Rescue Service Nigel Williams, said: "We are grateful to our colleagues at Norfolk Constabulary for the magnificent support they have offered overnight and today. In the future, we will be looking into the potential to sit down with colleagues with Norfolk Constabulary and discuss future arrangements which may be eligible for some sort of funding from central Government.

"Our priority today is to provide full fire cover for the people of Downham and I am pleased that this has been achieved very quickly. I'm very grateful for the excellent support we have received from our colleagues at Norfolk Constabulary."

Dan Roper, Cabinet member for Public Protection at Norfolk County Council, added: "Although incidents like this are very rare, we have contingency plans in place to deal with emergencies such as this. It is clear that these plans have worked well in practice. Fire cover was restored to Downham Market very quickly even while this incident was still being dealt with.

"This event reminds us that nobody is immune when a fire breaks out. I am pleased we have been able to move quickly and provide immediate cover for the people of Downham Market. We need now to explore what options are available to us in the longer term."

She said: "The destruction of the fire station is of course a significant loss to the local community but fortunately there has been no loss of life or any injuries sustained.

"I do want to praise the fire service for their rapid response. The first call came in at 1230 am and by 1250 am planning was already underway for the replacement engine to be on site. By 9.30 am a fully equipped engine was in situ in Downham Market with fire service personnel sharing resources and facilities with Norfolk Constabulary.

"This arrangement will continue for the foreseeable future with no loss of cover to the Downham area. I plan to visit the site later this week to discuss the longer term options."