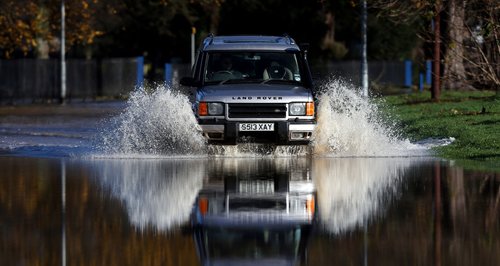 The Environment Agency are warning of possible flooding in low-lying areas of Norfolk and Suffolk tonight.

Homes on low-lying land on the Norfolk and Suffolk coast could be flooded tonight as a consequence of adverse weather, a spokesman said.

A combination of possible gale force winds, large waves and a moderate coastal surge could lead to localised flooding.

Across England there was an ``increased likelihood'' of flooding this winter - especially in the west, officials warned.

``Persistent'' wet weather in October has made the ground very wet, making rainfall more likely to lead to flooding.

A  strong westerly jet stream is expected to ``dominate'' through much of November bringing bands of rain, the Agency said.

It added that strong winds could increase the risk of flooding, as leaves and branches block drains and rivers.

Officials urged families and businesses to check their flood risk.

``The most important thing that we can all do to protect ourselves from the devastation that flooding can cause is to be prepared - by checking our flood risk on the Environment Agency's website, signing up to free flood warnings and making a personal flood plan,'' said David Rooke, director of flood and coastal risk management at the Environment Agency.

``Every #1 spent on protecting communities from flooding saves #8 in repairing damage.

``Over the last three years, we have protected an additional 182,000 homes and businesses with new flood defence schemes.''