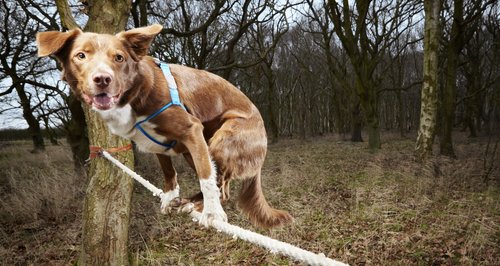 Ozzy the dog from Norwich is going into the Guinness World Records book for his tightrope walking skills.

He is a four and a half year old Border Collie/Kelpie cross-breed from Norfolk is officially the fastest canine on all fours on a tightrope.

He was able to cross a 3.5m stretch in just 18.22 seconds, earning him the title Fastest Crossing on a Tightrope by a Dog.

Ozzy lives in Norwich with his owner, 51-year-old Carpenter Nick Johnson.  Nick has no formal experience as a dog training, but says that he learnt techniques on the internet which have proven successful.  He says the key to training is relationship building and really making an effort to understand how your dog ticks.'

Nick continues: 'As Ozzy's parents are working sheepdogs on a farm, it's in his blood to want to work closely with me. Ozzy is most happy when he's working on the tricks that we do and regards it as a game. We also only practice when Ozzy is in the mood, after he's done all his important dog stuff, like sniffing around and meeting other dogs.'