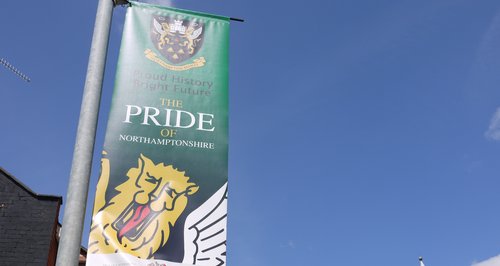 The victorious Northampton Saints are joining supporters in the Market Square today (Sunday 1st June) as they celebrate their triumph over Saracens at the home of English Rugby.

As the final whistle sounded at the Twickenham the final arrangements were agreed by Northampton Borough Council and the Northampton Saints to welcome home the new champions of England. Fresh from their victory on the pitch the new Aviva Premiership champions will bring both the Premiership trophy and Amlin Challenge Cup into the town centre to celebrate a historic double success with their fans.
At 12.30pm the Saints players and coaching staff will leave Franklin's Gardens on an open top bus and make their way to the Market Square. The Saints will arrive on the Market Square at around 1pm, the players will parade the both trophies before they make their way to the Guildhall.
Fans wanting to get the best view will want to gather on the Market Square before 1pm. When the open top bus arrives there will be opportunities to see the trophies and take photos as fans can join the celebration of a hard fought season that has seen the Saints win two prestigious trophies, and be crowned Aviva Premiership champions for the first time.
At about 2pm the players will make their way to the steps of the Guildhall to be formally congratulated..
Councillor David Mackintosh, Leader of Northampton Borough Council said: "This is a fantastic day for Northampton. Once again the Saints have done us proud bringing not one but two trophies back home and being crowned champions of England. I am looking forward to meeting with each player at the Guildhall to let them know, on behalf of the town, how proud we are of their achievements and what they mean to our town.
I would like to invite everyone to come into the town centre on Sunday to join us in recognising and celebrating the team's success. The Market Square is set to be a sea of black, green and gold with everything in place for a fantastic day. So, bring your Saints colours and help us give a great welcome to the players who proudly represent Northampton every week."
Saints chief executive Allan Robson says that the day will give the club the opportunity to thank the supporters who have given the team magnificent backing over the past season.
"Over the past few months Saints supporters have surpassed themselves with the backing they have given the team. We have had an outstanding season, reaching three cup finals and winning both the Aviva Premiership for the first time and the Amlin Challenge Cup for a second time in five years.
Sunday’s parade is an opportunity for us to share this success with our supporters and with the town of Northampton, whose name we carry with pride, and hopefully we’ll see plenty of people on the day!"
The main activity will be in the Market Square before a speech on the steps of the Guildhall. If you would like to see the open top bus, the route will bring the Saints into the town centre, leaving Franklin’s Gardens at 12.30pm to travel along Weedon Road, Gold Street and George Row before arriving in the Market Square by 1pm.