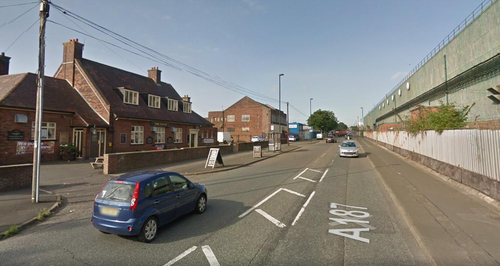 At 4:20pm on Thursday, December 8th, officers were called to a report of a disturbance outside of the Fosse Hotel pub on the Fossway.

A group of around 12 masked men, attacked a man who was standing outside.

Shortly before, the same group of men had visited the Jubilee club on Proctor Street.

They then drove from the Jubilee club to the Fosse Hotel pub in a white Vauxhall Vivaro van from which they launched the unprovoked attack.

They were armed with bats, metal bars, hatchets, knives and ammonia and after the assault they damaged a number of the pub's windows.

The men then got back into the van and fled the scene. A grey coloured Range Rover was then seen leaving the Fosse pub and following the van.

The Ranger Rover was later found abandoned in Scarborough Court and the van in Roman Avenue, police believe they were involved in a collision at some point.

Three men have already been arrested in connection with the incidents and bailed pending further enquiries.

John Thompson, 36, Station Road in Wallsend has been charged with aggravated taking of a vehicle without consent. He will appear at Newcastle Magistrates' Court on January 17th.

The 30-year-old man injured during the attack is still in hospital, where he's having treatment to a stab wound and a fractured skull.

A woman who was also standing outside of the pub was hit by ammonia during the attack. She attended hospital for treatment and since been released.

Superintendent David Felton said: "We need to find out who was in that van and who the group are that were involved in this serious attack.

"We believe that those involved in the incidents are all known to each other and we are doing all we can to identify them and have them arrested as soon as possible.

"This man targeted in this attack could have been killed that day and his attackers showed no concern for an innocent bystander who was injured by being splashed with ammonia, we will not stand-by and allow violent behaviour like this to happen.

"There will be extra patrols in the Walker, Byker and Wallsend areas in the coming days and a highly visible police presence on the ground and on the roads. The local pubs in the area will be getting regular visits by officers and we will be speaking to licensees, pub staff and customers about what happened.

"There was a lot of activity happening around the Fossway on that Thursday and we need to hear from anyone who might have seen anything or anything suspicious in the area. If you saw the attack or the vehicles flee the area, or the collision nearby then please ring us and pass this on.

"We've linked in with Crimestoppers and are offering a cash reward for any information that helps us arrest and convict those who are responsible for this. By going through Crimestoppers you can pass information on without giving us your details and still be eligible for a cash reward. I'd urge anyone who knows anything at all that might help us with the investigation to get in touch as soon as possible."

Police have teamed up with the independent charity Crimestoppers to offer a cash reward of up to £1,000 for information leading to the arrest and conviction of those responsible for the offence.