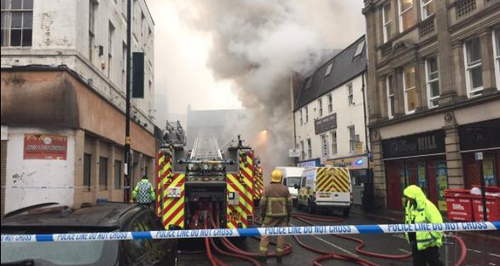 Tyne and Wear fire service have been dealing with huge fire at a shop in Newcastle City Centre.

The blaze broke out on Kard Bar on Cross Street shortly before 9am this morning.

At the height of the fire more than 55 firefighters were on the scene.

Fire crews say persons have been reported but it's not know if anyone is inside yet.

A statement by Tyne and Wear Fire Service says:

'We are tackling a severe fire in a building in Newcastle city centre and we have deployed more than 55 fire fighters on 11 appliances including two aerial ladder platforms.

I would ask members of the public to avoid the area for the time being. We understand this will cause some congestion in the city and would like to thank the public for their patience as we deal with the incident.'