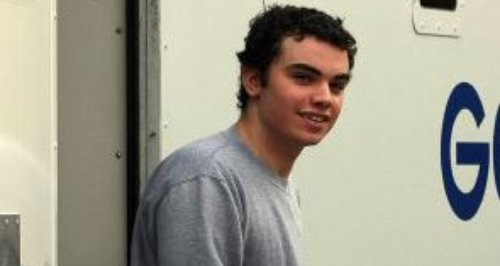 A 'cold and detached' teenager who planned to carry out a massacre at his former college with bombs and a semi-automatic pistol has been jailed for life with a minimum of eight years.

19 year old Liam Lyburd, 19, held a grudge against Newcastle College after he was kicked off his course for bad behaviour.

He retreated into a reclusive online world, rarely leaving his bedroom, and amassed a 'kill bag' and formidable weapons including pipe bombs, a Glock pistol and 94 hollow-tipped expanding bullets.

He was jailed at Newcastle Crown Court having admitted possessing the items and being found guilty of having them with intent to endanger life.

Judge Paul Sloan QC said he was in no doubt that Lyburd would have carried out his planned attack had he not been caught.

Lyburd gave no reaction as the judge sentenced him and told him:

'Your emotional coldness and detachment and your lack of empathy to others was self-evident.'

Police were alerted in November by a member of the public who was concerned about Facebook posts Lyburd made talking about launching a murderous attack.

In his room they found the cache of weapons, the bag containing his overalls, mask, boots and pipe bombs, and incriminating evidence on his laptop.

A computer specialist recovered a deleted file from his computer in which he wrote about getting vengeance on the college which had kicked him out two years before.

'You people ruined my whole life, don't expect me to show mercy today. No-one disrespects me and gets away with it.

'I'll teach you people a little lesson on respect with my 9mm jacketed hollow points.

'It's time for extreme civil disobedience.

'Fantasy will become reality today for sure. Where the mind goes the body will follow and, yes, people will die, there's no question about that.'

As Lyburd was taken away by police, he laughed and told officers they had saved lives, preventing what would have otherwise been a massacre at the college.

They found webcam pictures he took of himself dressed for combat, armed with a Glock and brandishing a knife.

A jury convicted him of eight charges of possessing those items with an intent to endanger life at Newcastle College following a trial in July.

The estate where he lived with his mother and sister near Newcastle United's stadium was cordoned off for days while police carried out seaches.