The first image shows  shows him on the Redheugh Bridge at around 4:30pm on Thursday, September 17th.

Around that same time police received two reports from people who had seen a person fall from the bridge.

Searches of the River Tyne were carried out and are still ongoing and as yet a body has not yet been found.

Northumbria Police say:
"Although we can not be definitely sure that the person who is thought to have fallen from the bridge is Robbie, we are not ruling out this possibility and his family has been informed.

We are appealing for anyone who was in the Redheugh Bridge area between 4pm and 4:30pm on Thursday, September 17, and who might have seen Robbie to contact us.

From CCTV we know there was two people who were walking on the Redheugh Bridge at the same time he was - we need to speak to this people as they might have information that could help us.

The first is a man in his late teens / early 20s, dark hair and who was wearing a blue hooded top and dark jeans and carrying a satchel style bag. He was walking across the Redheugh bridge from Newcastl to Gateshead at 4:20pm and walked passed Robbie.

The second is a man who was wearing green council worker style trousers with reflective hoops on the legs, a dark coloured long sleeved top and a cap. He was walking from Gateshead to Newcastle at 4:20pm and was walking just in front of Robbie.

We would appeal for these two people to come forward and contact us as soon as possible as they may be able to help with enquiries."

Anyone with information is asked to contact police on 101 ext 69191. 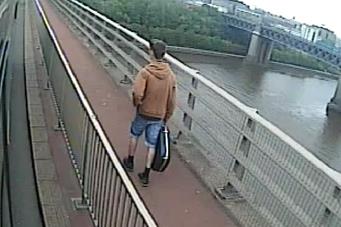