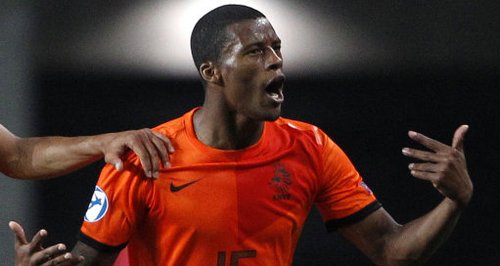 The 24 year-old moves to St. James' Park on a five-year deal to become the Magpies' first signing under new head coach Steve McClaren.

The deal for Wijnaldum represents the third highest transfer fee in the Club's history, after Michael Owen and Alan Shearer.

Wijnaldum said:
"I'm delighted to be a Newcastle United player."

"I felt the time was right for me to move and the Club have shown they really want me, so I'm very happy to be here."

"There's a few players here who are from Holland - I know them well and they will help me feel at home in Newcastle."

"I know the Club has a great stadium with great fans. I want to play here as soon as possible - I want to feel the atmosphere and hear the crowd. I cannot wait to get started."

Steve McClaren added:
"This signing is a real statement for the Club. It is a big transfer for a very good player and I am delighted to have Gini here at the Club."

"He has lots of energy and a great tempo to his game. He is very skillful but is also capable of playing box-to-box, and - importantly - he can score goals."

"He is at the right age and the right fit for Newcastle. He is a leader as well and you will see that. He is someone who always wants the ball, can deal with it, and we need that kind of character in the team."

Born in Rotterdam, Wijnaldum began his career with local side Sparta Rotterdam, remaining with them for seven seasons before joining neighbouring Feyenoord.

Wijnaldum made his first team debut for Feyenoord aged just 16, earning a man of the match award in what would be the first of 134 appearances in five seasons at De Kuip.

Shortly after being called into the Dutch senior squad for the first time in 2011, the midfielder made the switch to Eredivisie rivals PSV, where he would register 56 goals in 152 appearances before arriving on Tyneside.

As captain of PSV, Wijnaldum led the club to the Eredivisie title last season and was crowned Dutch Footballer of the Year 2014/15.

PSV Eindhoven have confirmed that Georginio Wijnaldum is on his way to England to agree personal terms with Newcastle.

The 24-year-old is due to fly into Newcastle today for a medical and Press Association Sport understands the Barclays Premier League club have agreed a fee of around 20million euros (£14.4million) for the 19-times capped Dutch midfielder.

Newcastle hope to complete the deal before the squad departs for a pre-season tour of the United States this weekend.

'Georginio Wijnaldum has left the players' hotel in Evian-les-Bains,'

'The 24-year-old captain is on his way to England to reach a personal agreement there with Newcastle United.'

Wijnaldum extended his PSV contract until the summer of 2018 last year and has made more than 100 appearances for the club since joining from Feyenoord in 2011.

Phillip Cocu named Wijnaldum as captain following his appointment as PSV head coach in 2013 and the Rotterdam-born player impressed as the Netherlands finished third at the 2014 World Cup under Louis van Gaal.

If, as expected, Wijnaldum completes his move to Tyneside he will become the first signing of new Newcastle manager Steve McClaren.