NUFC Fan Gets Reward For Helping Clean Up After Derby 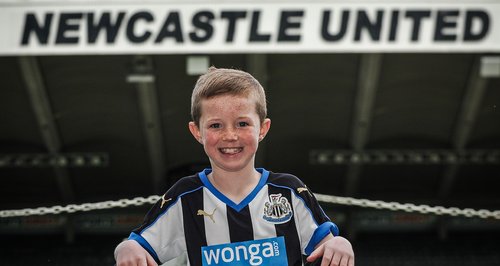 A young Newcastle United supporter who helped police to clear up after the recent Tyne-Wear derby match at St. James’ Park has been given a special reward by the Magpies and Northumbria Police.

Seven-year-old Tyler Heaviside from Middleton-in-Teesdale, County Durham, was the subject of a public appeal by officers after he was spotted on CCTV clearing up rolls of police tape outside the ground following the game, ensuring the area was left nice and tidy after most fans had gone home.

Now, after Tyler was successfully identified, he will return to the stadium as a special guest and will lead the teams out before United’s Premier League fixture with Manchester City, which is live on Sky Sports on Tuesday 19th April.

'Tyler played his part in what was a very successful day and deserves recognition for spending part of his afternoon helping our officers outside the stadium.

'It is only right that he is rewarded and I hope he thoroughly enjoys walking out with his team at St James’ Park. We want a say a big thank you to him from Northumbria Police.'

'We continue to ask fans to support stewards and police officers in their work to make the stadium a safe and enjoyable place to be and Tyler has really gone the extra mile.

'His good deed deserves special recognition so we’re delighted to pass on our thanks in person. We look forward to welcoming him as our mascot for the visit of Manchester City.'

HGV driver crisis: 'Things are not visibly getting better at this stage'